Middle East to join the CREW 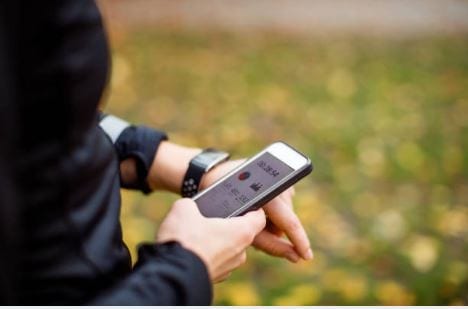 Building on its existing success in the region, the company plans to increase its activity in the Gulf region, which includes the United Arab Emirates, Kuwait and Oman.

8 West is the company behind an innovative new remote monitoring system, CREW, which is designed to protect frontline healthcare workers and their patients from the spread of Covid-19.

A rise in body temperature is the symptom that is most common among all sufferers of virus.  A spike in temperature, particularly when combined with an increased heart rate, at a time when no other physical activity is taking place – such as when a person is asleep – can provide a key early warning sign for the onset of Covid19.

CREW consists of a wearable digital thermometer sensor which measures body temperature, and a sensor platform such as a smart phone, smart watch or other IoT (internet of things) device, which runs the CREW app.

A cloud based server then runs the CREW system, monitoring incoming data from frontline workers wearing the device. If an elevated temperature is recorded over a specified time frame, CREW generates an automatic alarm warning both the wearer and their employer of their need to take remedial action and self-isolate.

Collaboration for the greater good

The system has been developed by 8 West in partnership with the Ireland’s College of Medicine and Health at University College Cork (UCC), its ASSERT Centre and the renowned Tyndall Institute. 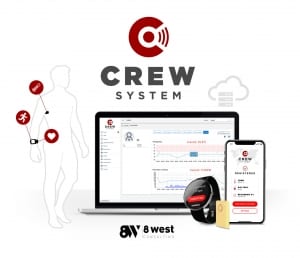 Trials are being undertaken at Cork University Hospital.

“We are 24 hours on the front line of care daily, and it’s good to know that efforts like this are being made to support our wellbeing 24 hours a day too.”

The company, which has been in operation since 1998, specialises in providing technology service solutions to the healthcare and retail sectors to international clients such as insurers Anthem, Delta Dental and DentaQuest, and brands such as Estee Lauder and Ralph Lauren.

It is a product innovator too however, developing its own proprietary solutions. One of these is SafeTrx, which is now Europe’s leading tracking and alerting software platform for the marine sector and which was used in 625 rescue missions last year.

It is thanks to SafeTRX that 8 West has an established presence in the Middle East. A bespoke version of what was originally a marine product is now relied on by Dubai’s police force as a way to remotely monitor and leisure sailors in Dubai waters.

According to 8 West founder and co-chief executive John Murphy, the solution was developed from start to finish in just three weeks, “a Herculean effort from our employees” and a part of its contribution to the global crisis.

“Fifty per cent of humanity is self-isolating at the moment. We’ve never seen anything like this before and we’ll most likely be living like this for the next 12 months.” said Murphy

As such he believes an early warning system such as CREW, alongside measures such as social distancing and workplace deep cleaning, will be required for a long time to come as part of all employers’ duty of care to staff.

In the meantime, his goal is to make CREW available to as many frontline staff as possible around the world as soon as possible.

It has the potential to help not only individual medics but the wider hospital and nursing home communities and the general public too, says Murphy, who is due to meet with healthcare sector representatives from Oman, Kuwait and the UAE over the coming weeks.

“The Irish response from around the world and particularly the tech sector, was very collegiate. Everybody was ready to give support because, with Covid19, we all share a single purpose now.”  said Murphy

CREW’s market expansion strategy is being supported by the Enterprise Ireland team in Dubai who are working closely with 8 West to identify optimal routes to market with key local partners.

According to Mike Hogan, Regional Manager Enterprise Ireland, “Markets across the Middle East are always keen to acquire cutting edge technologies and we think this is even more prevalent in the current situation fighting the spread of Covid-19. I’m sure 8 West’s CREW solution will play a big part in fighting the spread of the disease and protecting the frontline health workers who are doing an incredible job keeping our communities safe”.

Read more about the Irish companies using innovation to make a difference.