Ambition Benelux: How we got up and running 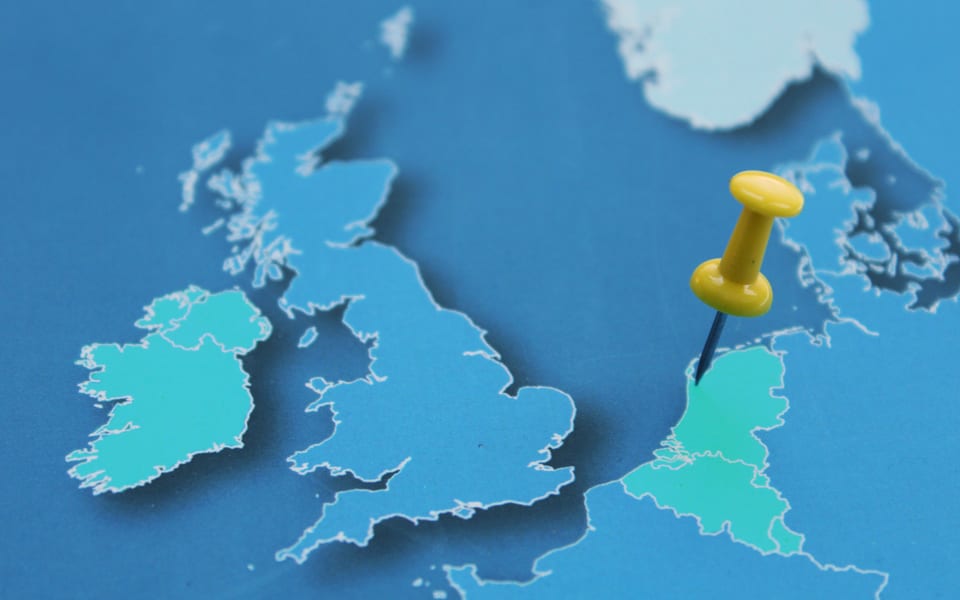 There’s an interesting Dutch saying for doing business that describes the appetite in the Netherlands for making something out of nothing: “Let’s make land together”.

It’s what the Dutch excel at and applies equally to trade and business. Where there is a market opportunity, chances are a firm from the Netherlands and Benelux region will be on it from the outset.

It should come as no surprise. The Benelux economies are some of the most open and easily accessible in the Eurozone, and also among the most lucrative.

Benelux as a gateway to the Eurozone

The Netherlands, Belgium and Luxembourg often present themselves as the gateway to Europe, in both a physical sense in shipping and logistics, as well as in areas such as data and financial services. And they have good reason to, with 200 million consumers living within just 500 miles of Benelux cities.

With a very compact and centralised population of their own serviced with excellent infrastructure, the opportunity has not gone unnoticed by Irish companies keen to diversify and take operations into the Eurozone.

At Enterprise Ireland’s Ambition Benelux event, companies that have entered the region explained why – and how – they chose to launch to secure the growth their companies required.

Gone are the days when a company could simply open a virtual office. Now companies must decide whether a branch office of their Irish company is best to get boots on the ground, or whether they need to set up a company in the usual manner in the export country. Either way, Irish companies have prospered by making their foray through a distribution agent or local partner, which provide useful market introductions and a real face-to-face contact point for clients and customers.

In some cases, the move is strategic from the get-go. In just 14 months, Parkpnp, a marketplace for renting unused car parking spaces, has expanded from Ireland into both Belgium and Netherlands with ambitions to enter a further eight European markets in the next two years.

For Jason Popplewell, Parkpnp COO, it became clear that branching from the Irish market to the UK or US would see his fledgling firm bump into larger and more established competitors in the sharing economy, so Europe was a logical choice.

“About six months ago, we acquired a company in Belgium called Sharemypark but they were just doing residential car parking spaces. It was a great match for us to bolt onto our system and it’s going very well.”

With a presence in Belgium, the company then moved into franchising their model.

“We sold our franchise into the Netherlands, and that launched around four months ago, and that’s going very well.

“Ultimately nothing beats feet on the ground.”

The boom in data centre construction in the Netherlands in particular, and the wider cleanbuild, pharma and life sciences sector has seen Irish design and construction expertise in demand. The trend has seen firms like Dublin-based RKD Architects move into Belgium and in a client-led sector, having a local presence has been vital for winning and expanding their order book.

Director, Geert Douterlungne said: “At the end of the day, it’s just an extra 10 minutes in the plane from Dublin. Clients want to meet, and given the location, you can be there to resolve any issue quickly.”

But entering a new market may force a company to learn some hard lessons, said Jim Costello, founder of Forest Produce, a horticultural giftware company. Entering the floral and horticulture market in one of the most competitive markets of its kind in Europe saw Costello quickly realise that competing on price points would not be an option.

Getting a foothold in the market required Forest Produce to bring a USP to the table.

“The Dutch are very competitive and will outsource to a cheaper alternative very quickly. But what we have found though is that Dutch customers appreciate innovation. If you have something novel that they like they will pay good money for it,” said Costello

“You have to have something cutting edge. If you have something that is unique, be it a service or solving a problem, that is what we have found is the way to get and keep your company relevant in the Dutch marketplace.”

Darren Fortune, managing director of Wicklow-based Ventac, a specialist acoustic solutions company in the automotive industry said they opened their first overseas office in 2011 near Eindhoven.

“The UK was our biggest market but we knew that the bigger volume was Europe itself, so we wanted to break out.

“We went to Enterprise Ireland and did a lot of market research. We felt that the Netherlands was a great start, as it was easy access and the language barrier was negligible. Enterprise Ireland introduced us to people in our sector and, because the Netherlands is big into sector clusters, we were able to get into the automotive sector very quickly.

“The legal stuff scared me a little bit but it was much easier than we anticipated. We rented an office for €8,000 a year in a business centre with around 30 other firms and we were up and running.”

It’s a much-trotted out axiom in the age of the multinational: think global, act local. But with Benelux, it is possible. Fortune added: “It’s an hour away and they want to do business. What more could you want?”