When the Beach Boys come calling to ask if they can use your technology, you know you’ve done something right. In 2012, Dr. Derry Fitzgerald, who had spent 12 years researching the manipulation of audio in Cork Institute of Technology, got such a request.

“They asked me to use the audio separation technology that I’d developed to split some songs that had been recorded in mono and remix them in stereo. I ended up getting credited on four Beach Boys reissues!” says Fitzgerald.

It was more than enough to convince him that he was on to something that had commercial value.

“I knew then that the tech was ready to be used in the real world and I began thinking about how I could make it commercially useful, because at that stage it was just a bunch of scripts on my computer that nobody else could use.”

Fitzgerald applied for Enterprise Ireland’s Commercialisation Feasibility Study, which enabled him to do some market research. He then embarked on a Commercialisation Fund project, carried out in Cork School of Music in CIT, to develop his first commercial product.

“I’m not a business guy, I’m a tech guy. So as part of the project I had to find a business partner and I did that through Enterprise Ireland’s Business Partners Programme,” says Fitzgerald.

Businessman John O’ Connell, now CEO of AudioSourceRE, was one of the business partners contacted by Enterprise Ireland. He recognised that there was potential in the technology but that more needed to be done.

“I met Derry and he showed me what the technology was,” says O’Connell. “It was in a very raw state so I gave some feedback and asked him to give me a call when it reached the beta stage, when it could be shown to some people in the market. Nine months later, I got the call and went back and started working with Derry to create a minimum viable product.”

The team focused on creating a prototype and got the opportunity to demonstrate it at Abbey Road Studios in London. The feedback was very positive. 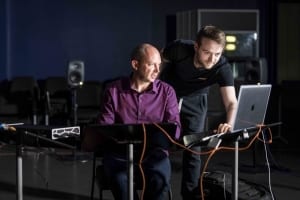 “At that stage, John came on board full time and started to develop the business plan for the company, so that left me able to focus on making the software as good as possible. He pushed us to clarify what we were trying to get out of the project,” says Fitzgerald.

O’ Connell explains: “There’s a lot of research required to find out if something that’s created in a university can be developed into a commercial product. So, it takes a lot of work to get to spin-out stage. One of the biggest challenges is that the world of academia and the commercial world are poles apart in terms of mindset.”

It’s a sentiment echoed by Fitzgerald. “Personally I found the biggest challenge was getting things done faster, and moving on to the next thing. It was about changing the way I worked.  I learnt an awful lot about things I never expected to learn about – how business plans are structured, financial aspects, day-to-day business operations. So I went relatively quickly from being a very traditional academic researcher to someone who had a strong business head.”

With O’Connell’s input the project became more focused, developing a strong commercial roadmap that enabled the team to progress quickly towards a commercially feasible product. Feedback from musicians and audio professionals helped clarify what the market wanted and just three months after setting up the company in 2018, AudioSourceRE launched its first two products, DeMIX Pro and Essentials, at a major music fair in New York.

“We’ve been selling products for the last year, relying on the initial seed fund money that John and I put in and funding we got through Enterprise Ireland’s Competitive Start Fund, but we know there is still a way to go to make a profitable business,” says Fitzgerald. 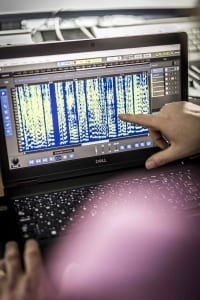 O’Connell and Fitzgerald are now in discussions with venture capitalists and Enterprise Ireland about getting investment to grow. “We feel that we’re at the point now that with a little more R&D we can open up a whole range of creativity for audio manipulation,” says O’ Connell.

With plans to have nine employees by the end of year one, and to use AI to complement Fitzgerald’s skills, the company has a strong sense of where it is going.

Reflecting on the journey so far, Fitzgerald says: “My experience of spinning out AudioSourceRE has been overwhelmingly positive, so my advice to other academics would be, be brave and go for it. Start off with the objective of creating something that can be sold in the real world, not just completing an academic project.”

O’ Connell adds: “Getting a business person on board as early as possible on the journey will really help with guiding the direction of the project, deciding where the funding should be spent, and where the research should be focused to find out if it’s really suitable for commercialisation.

“Enterprise Ireland’s support was invaluable. We were able to ask for advice and get introductions to other people who have done something in a similar field. They give you the opportunity to take something and with a little bit of investment see what the commercial potential is.”

Getting There: Strategies to promote gender diversity in business