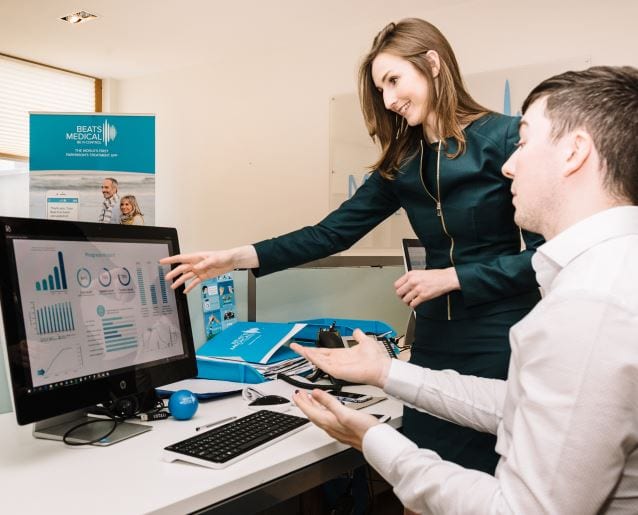 “It’s a huge honour to be supported by the European Commission and really push the limits of what we are doing with this technology….this grant will support us in having the impact we’ve always wanted to have.”

At the age of 22, Ciara Clancy set up Beats Medical, a game-changing medtech company determined to find new ways to treat Parkinson’s disease. “From the start, I was interested in what is now called ‘digital therapeutics’,” she says, “It’s an established field of healthcare now, but then there was no name for it.”

As a practitioner, Clancy was impressed by the ability of ‘metronome therapy’ to alleviate Parkinson’s walking symptoms. Through an auditory cue system, the therapy replaces the brain signals that are impaired by the disease, helping to overcome the shuffling walk, shortness of breath and freezing so often associated with the disease. While she had no doubt about the efficacy of the therapy, Clancy wanted her clients to enjoy its benefits not only in the hospital, but in their own homes.

“For people with neurological conditions,” Clancy explains, “the symptoms vary not only from person to person but from day to day and hour to hour – no one solution fits all.”

This means that the therapy must be tailored regularly and precisely, making it challenging to prescribe it as ‘homework’.

If she could find a way to deliver these therapies remotely, however, Clancy believed she could dramatically improve the lives of countless people living with Parkinson’s, giving them more control over their symptoms every day.

When, in 2012, Clancy founded Beats Medical, her aim was to design a device that would give those with Parkinson’s access to therapy between hospital visits. She needed to create a device that could analyse individual needs and generate tailored metronome therapy prescriptions.

“I had support from Enterprise Ireland at this stage,” explains Clancy, “as well as feasibility funding and Competitive Start Fund (CSF) support. The initial years of research were about seeing if it was even possible to do this.”

It was soon clear that Clancy was onto something. In 2015, she was named Laureate for Europe at the Cartier Women’s Initiative and the same year Beats Medical became one of Enterprise Ireland’s High Potential Start-ups, giving Clancy the financial support needed to start building a team.

“One of the first people I brought on board was Dr. Wui-Mei Chew, a medical doctor and researcher specialising in molecular medicine,” says Clancy. “We had met at university.”

A year later, she won Ireland’s Best Young Entrepreneur and Best Established Business awards, which together earned her €60,000 via an investment fund from Enterprise Ireland and the Local Enterprise Offices.

With their hard-won R&D funding, the team spent two years developing algorithmic and analytical processes and building the initial prototype. They then went on to test the device with a number of Irish universities, as well as with the UK’s largest Parkinson’s charity, Parkinson’s UK.

After some trial and error, Beats Medical had developed a core technology platform that could deliver cost-effective daily assessments and individually tailored therapy to clients. 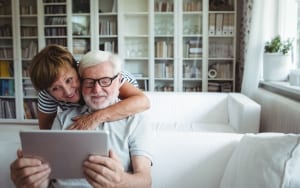 Despite these developments, it wasn’t all plain sailing for the young company. Not satisfied to stop there, Clancy had her sights set on expanding the technology to treat speech and fine motor skills. Beats Medical reported financial losses two years running while it tried to develop and expand its product but continued to make its existing device available to those with Parkinson’s.

This tenacity paid off. In 2018, Clancy’s company launched one of the first digital therapeutics in Europe to attain direct reimbursement, with the Beats Medical Dyspraxia app covered by Vhi Healthcare.

Today, the company employs twelve people and has offices in Dublin and Lisbon. It delivers therapies to people in over 44 countries.

Change on the horizon

Beats Medical has seen for itself how ambition can threaten financial viability. For SMEs like this, the high risk associated with innovative solutions can prevent ideas from reaching their full potential.

This is where Horizon 2020 comes in. The EU Framework Programme for Research and Innovation aims at helping to mitigate the hurdles to scientific development and innovation in Europe by supporting high potential SMEs. The fund provides direct financial support to selected SMEs, as well as nourishing innovation capacities.

The Horizon 2020 Enhanced European Innovation Council (EIC) Accelerator Pilot is an incarnation of its ‘SME Instrument’. The pilot has €149 million funding available to distribute as grants to 83 SMEs and start-ups around Europe.

“We applied for the EIC Pilot to be able scale up our current core technology platform in order to further deploy the technology in more disease areas,” says Clancy.

In September 2019, Beats Medical was one of eight Irish SMEs to be awarded the pilot’s full-cycle business innovation support. It received a co-financing grant of €2.4 million, as well as coaching and mentoring.

“For us, it’s a huge honour to be supported by the European Commission and really push the limits of what we are doing with this technology,” says Clancy. “Now, we can expand our product and research activities to multiple neurological conditions. We want to continue to better treat these patients and inform the health sector as a whole. The grant will support us in having the impact that we’ve always wanted to have.”

The EIC Pilot will fund a two-year project as part of Clancy’s ambitious five-year plan to not only transform the way neurological conditions are treated but generate a better understanding of the brain. Already, the company has started new and promising research, and has just been assigned their EIC business coach.

“The EIC Accelerator Pilot is a great programme,’ adds Clancy. “It’s really important that other companies focused on deep research and innovation know about this.”