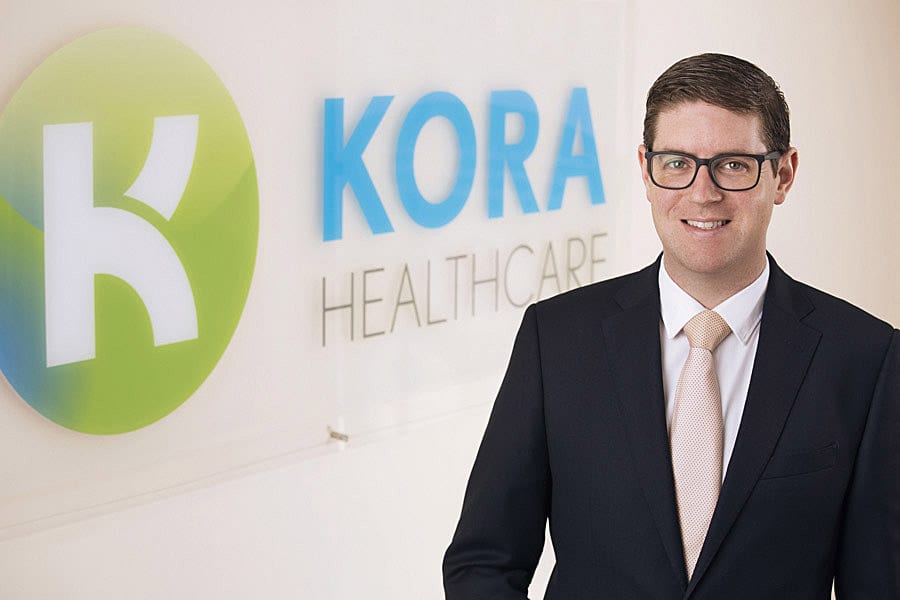 It has been an extraordinary year for business across every sector and many companies in Ireland and around the globe have been badly affected by both the pandemic and the onset of Brexit.

But the healthcare industry is one which has managed to stay afloat and even thrive during the crisis as demand for its products and services increased.

Conor O’Daly, CEO of Kora Healthcare, which was originally established in 1994 but ‘reborn’ in 2011 when its sister company was divested and it refocused its sights on a more international market, says the company was fortunate to have been well prepared when the pandemic hit.

“Every business has felt the impact of the crisis over the past 12 months, and we, like everyone else, were taken by surprise,” he says.

“But thankfully we are an organisation which has always worked towards continuous improvement and given our size (32 employees across Irish and UK branches), we were agile and able to adapt easily.” says O’Daly

“When it came to remote working, our IT set-up was thankfully already in place as some staff had been working from home on occasion or internationally and we also have pretty adaptable working methods so rather than hibernating or going into sleep mode, we looked for opportunities. One we quickly seized on was launching our new portfolio of Vitamin D products, under our brand FamilyD, which of course are very front of mind now as every time you open a magazine or put on the TV, people are talking about Vitamin D and its benefits on the immune system given Covid. Fortunately, we had a well-established brand BabyD in the Vitamin D space but were looking to expand the portfolio and recent events gave us the push to do just that.”

The emerging pharma and medical device company, which is based in Swords, has actually increased its head count since the start of the pandemic and thanks to a forward-thinking ethos, has not only survived the current crisis but has also prepared well for Brexit and is coping well with the new regulations.

“Given the industry we are in, there was a huge amount to prepare ahead of Brexit,” says O’Daly. “When the UK left the EU, there were always going to be huge changes with regard to the regulation, control and monitoring of medicines and medical devices and impact to Kora Healthcare. It is a heavily regulated industry, and rightly so, so understanding the finer details and scenario planning became a challenge when there was an information vacuum at times.

“But we started preparing for this right from the start –the day after the Brexit vote was revealed, as we knew there would be a lot involved. We broke down the issues into five broad areas – people, finance, operations, intellectual property, and customs – and looked at how they would impact our business and what we would need to do to ensure a smooth transition and continuation of business.

“We have experienced no issues so far, aside from understanding finer details related to Northern Ireland protocol in the latter months of 2020. But we said from the start that we wanted a ‘no regrets Brexit’, so we prepared for the worst and hoped for the best. And when we got back to work on January 4th, we had to roll back on some of our worst-case scenario preparations. The only thing that still concerns us, and perhaps the industry in general, is UK logistics preparations and movements in and out of the UK.

Looking back over the past 2 ½ years, we have been very proactive to the point that at every opportunity we reflected on and discussed Brexit and its impact.”

Taking the step into new markets

Along with preparing well for Brexit, the Dublin-based company also decided to open a branch in the UK, which will ultimately, make doing busines there a lot easier.

“Because we already had a commercial team in the UK and increasing revenue was coming from there, we decided the time was right to scale commercially and establish a firm footing and opened a subsidiary in York,” says the company CEO. “Regardless of the Brexit vote, we felt that it was the right time for us to formally put a structure and more dedicated resources.

“Over 50% of our revenue comes from UK, but also we wanted to grow internationally and have put more resources towards developing in other countries such as Germany and Belgium – and we are also looking to branch out to Canada and the US by hopefully opening an office in Canada to cover that jurisdiction.

“Brexit prepared us for further trade and has made diversification across additional territories much easier. ”

“Of course, as a company, we have always been internationally driven and market our products in 32 countries, either by ourselves or with partners – so we are not afraid to do business around the world and the reality of Brexit gave us the incentive to push more into Europe, which is what we hope to do next.”

O’Daly says that Enterprise Ireland was also a huge help when it came to developing the business abroad.

“Right from day one, Enterprise Ireland was a fantastic resource for us,” he says. “We got some necessary supports and consultancy advice in the early stages particularly around financial planning, given the impact on exchange rates.

“They also ran some very informative seminars and then in recent months, some very useful webinars. And our development advisor has been in contact on a regular basis to make sure we were working on the things we needed to and to check if we needed any additional support.”

While the team at Kora Healthcare has managed to survive and thrive over the past year, they also have plenty of plans for the future and would advise other healthcare companies who are considering branching outside of Ireland to plan well ahead.

“Things can move very slowly in our industry and when it comes to registering or developing a medicine or therapy, it’s a thorough process – not everything happens as swiftly as the Covid vaccine,” he says. “So I would advise other firms to prepare well in advance. And while the UK is still our closest neighbour and trading partner, so it’s natural for Irish companies to seek to trade with them initially, I would also encourage looking to the Eurozone markets sooner rather than later.

“There will be benefits to ongoing trade with our nearest neighbour, but doing business with the UK may become more cumbersome – so we shouldn’t forget about France, Germany, Italy and Spain – as they are all viable and mature markets which are of similar size or indeed bigger than the UK.”