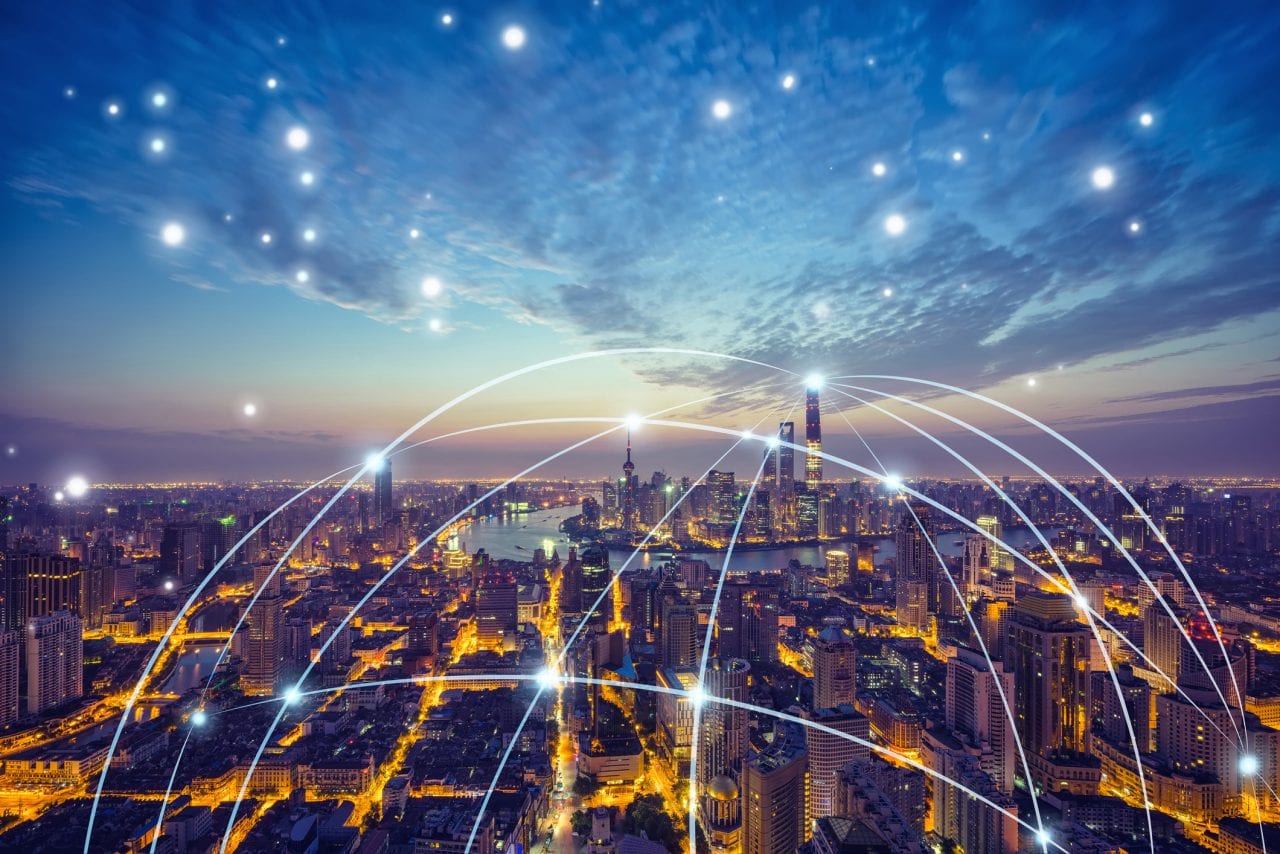 When is a bin not a bin? When it is also an advertising hoarding, a Wi-Fi hotspot and an environmental monitoring station. Welcome to the world of the smart city, where ICT is creating multipurpose infrastructure with inbuilt features, making it easier and cheaper to manage.

Smart cities have been defined as cities that aim to achieve high levels of sustainability, economic development and quality of life through investment in physical capital (infrastructure), human capital, social capital and ICT. A more hard-nosed way of looking at smart cities is in terms of the commercial opportunities they offer ICT product and service providers.

Nevertheless, technology, and the internet of things (IoT), in particular, does provide a means for improving the efficiency of our cities and urban spaces. Dublin City Council’s ‘smart bin’ initiative is a case in point. ‘Smart bins’ are solar-powered rubbish bins producing the energy required to power internal compactors that reduce the volume of rubbish. As a result, bins are emptied three times less often. An additional smart bit is that, when they are full, the bins send an alert to head office letting them know.

These types of bins were first trialled in Dun Laoghaire, using bins manufactured by Massachusetts-firm Bigbelly. However, a key Bigbelly component, the antennae, was provided by Taoglas, an Enniscorthy-based firm that is a world leader in antenna design and manufacture.

Taoglas produces a myriad of antennae because different methods of wireless communication are needed for different applications and locations – such is IoT. For example, Taoglas’s 5-in-1 Storm product, typically used on police and emergency vehicles, houses two LTE MIMO antennae, two Wi-Fi MIMO antennae and one GPS antenna. Not only do officers remain in radio communication with their dispatch, their dispatchers can view the live, or recorded, video feed from the vehicles’ onboard cameras and from the cameras worn on the officers’ person. HQ also has live access to data about the officers’ and vehicles’ performance. In the case of the officers, they can track heart rates and whether the officers are standing, seated or prone, and, in the case of the vehicles, they can see where they are located, how they are being driven and when they next need a service.

Another Irish company is involved in the technology behind some of these smart police vehicles. Dublin-based Davra Networks is a world leader in the development of IoT application enablement platforms, a platform-service that allows IoT developers to easily deploy and scale their applications.

Davra’s CEO Paul Glynn says IoT is about “people connecting things that they never connected before”. He explains that by networking assets, by whatever means, Wi-Fi, cellular, satellite or via a low-power WAN such as Sigfox, it becomes easier to manage those assets individually or as a whole, “to solve management headaches be it in a factory, a power supply or a smart city”.

An example of IoT everywhere is Wembley Park in London, a massive 85-acre urban regeneration project. As well as being billed as “the UK’s biggest buy-to-let building scheme”, Wembley Park is hailed as “the world’s best connected mini-city”, with Irish firm Magnet Networks, a specialist in FTTP (fibre-to-the-premises), providing homes and businesses with broadband connection speeds ranging from 100MB to 2GB.

Building contractors aren’t especially interested in FTTP until they hear that it can reduce their M&E (mechanical and electrical) cabling costs by up to 65%, says Magnet’s CEO Mark Kellett.

We are learning from each phase of the project. For example, the builders spent too much money on connection points in the first set of apartments because students don’t want to plug their laptops and devices into the wall. As long as they have three-bar Wi-Fi, they are happy.”

Wembley Park is built around Wembley Stadium and Wembley Arena (now officially the SSE Arena), and it is also home to the London Designer Outlet (LDO), an 85-store shopping centre that Kellett describes as ‘Kildare Village on steroids.’ This is an example of a physical and economic investment to create a smart city environment, as the student residents have a source of weekend employment in the LDO. There is also part-time employment available when events are held in Wembley Stadium or the SSE Arena.

There is smart city ICT aplenty there too. “There is a number plate recognition system in the car park, so from the DVLA database, we know who each car belongs to and where each car owner lives,” says Kellett. “That has a security application but we can also make a good guess as to a visitor’s spending-power, based on their address. And, if a visitor logs on to our free Wi-Fi, we will have some access to their browsing history, so we can direct them, via their smartphones, towards special offers they might be interested in. We can also follow them as they travel through the London Designer Outlet or past the shops on the way to the Wembley Stadium and see where they stop and what they are looking at. There are a number of Irish companies who are very good at tracking how people travel through a retail space, and we are working with them on that.”

“The Internet of Things is very like what we used to call ‘M2M’ or machine to-machine communication, with one small difference,” says Glynn. “With M2M, data is siloed; with IoT, you are using multiple sources of data. A good example is in fleet management where with, say, a refrigerated truck, you have one solution, such as Fleetmatics providing GPS information and telematics. You have another solution, GreenRoad, providing data on driver behaviour. Another solution, Blue Tree, is monitoring the refrigeration in the trailer, and all the pallets in the trailer are tracked using RFID. In the world of M2M, each of these solutions works separately. With IoT, you put a network on the vehicle, using a Cisco or a Dell router, and you collect the data from all those sources, and you use them together to work more intelligently.

“Also, you don’t need to send all the data into the cloud on the network all of the time. For instance, the onboard computers fitted on most car engines since 1996 produce more than 25,000 data points every minute. You don’t want to be sending all that over the network continuously. You need the system to send the data when it needs to be sent. We are involved with a connected light rail system in San Diego and a heavy rail system in New Jersey. Vibration levels are one of the things that need to be monitored: if the vibrations go beyond a certain threshold, an alert is sent to the operator. But the threshold varies according to the ambient temperature: the colder it is, the lower the vibration threshold before an alert is sent.”

In the smart city sphere, Glynn sees IoT opportunities galore, especially in the areas of transport, energy and security.

“One of the big issues is who is going to pay for it and, secondly, will you be able to get various parties to share their data,” he says. “In some countries, you can force people to share their data, in other places you can’t.” Because Dubai’s smart city initiative is being driven by the country’s ruler, it is on track to have the world’s smartest city by 2020 (including connected police cars enabled by Davra Networks).”

“Cities in Europe are a bit behind that,” says Glynn, but he points to some very European initiatives that are already bearing fruit. “In Croatia, they have fitted all their manholes with sensors, so they know when they are being lifted when an authorised person isn’t present. As a result, they have become very good at tackling the growing problem of copper cable theft.”

“There are great opportunities for those who will develop IoT apps and it is something that is becoming easier to do. A developer can use our ConnecThing AEP platform for free with up to three devices to help them get their ideas beyond the proof-of-concept stage. Once an app has been tried and tested, it might be sold by our 65,000 reseller and system integrator partners. For example, we have a revenue share with the developer of a smart healthcare app that is sold per hospital bed and is now doing very well in the United States.”

Brendan Carroll, CEO at EpiSensor, a Corkbased specialist in the Industrial Internet of Things (IIOT) space, says that the sector is a particularly good one for smaller companies.

“Traditionally, when a company was having an IT upgrade or having a LAN installed, all the work would be done by a single large supplier, an integrator like Siemens or Honeywell or Schneider Electric. In IoT, a lot of the solutions are made up of layers of different technologies from different companies, so that creates huge opportunities.”

Enterprise Ireland development adviser Robert Bushnell believes that the IoT will become so ubiquitous, people will stop using the term.

“There was a time when people talked about digital cameras and digital music but no one uses the term digital anymore,” he says.

Glynn agrees, “It’s like e-commerce: it’s everywhere now and nobody uses that term.”