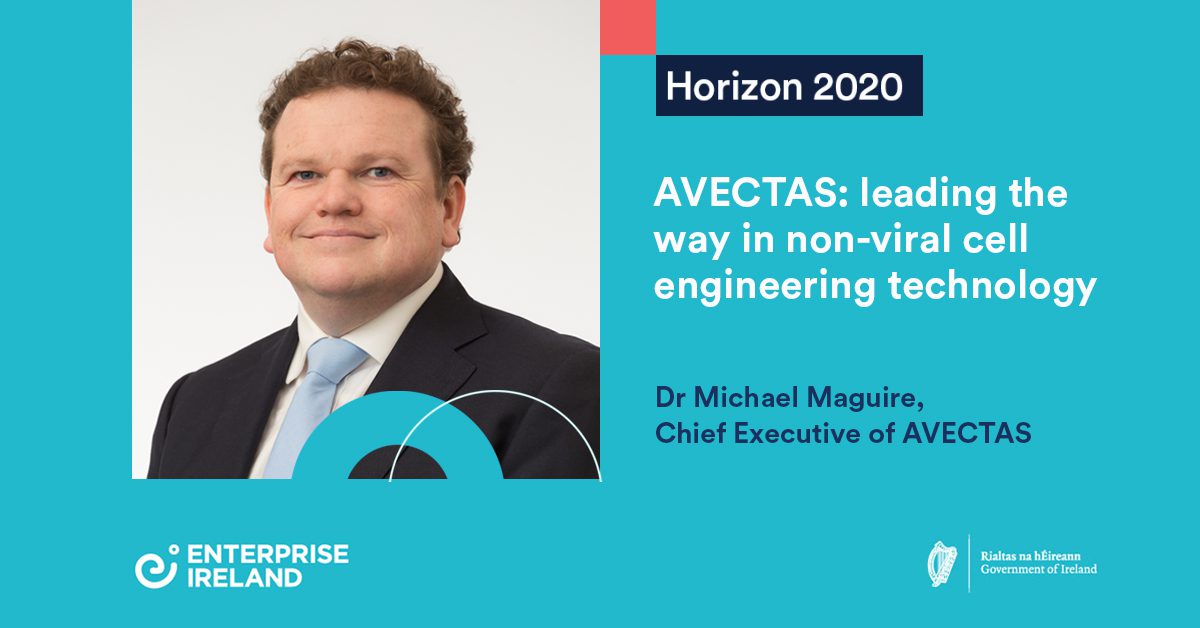 “Horizon 2020 was all about scientific excellence; this project allowed AVECTAS to further develop our pioneering SOLUPORE® technology within a structured framework.”

Cellular immunotherapy is an exciting new approach to treating cancer that offers hope to millions of people worldwide as it has the potential to cure the disease without the harsh side effects of treatments such as chemotherapy.  It involves editing genes outside the body, in effect arming them to attack and kill cancer cells when they are infused back into patients.

Generally, viruses are required to re-engineer cells but AVECTAS, a company headquartered in Dublin and with locations in Canada and the USA, has developed a novel, non-viral gene editing approach that has multiple benefits over alternatives.

“At AVECTAS we’re looking at the next generation of cancer therapy products, including complex gene editing that will address the treatment of solid mass tumours.” explains Dr Michael Maguire, CEO of AVECTAS

“We have developed a cell engineering platform, SOLUPORE®, which works by temporarily making the cell membrane permeable to allow cargo such as mRNA, RNPs and plasmids into the cell.”

“The key difference between our platform and competing technology is the gentleness. Currently, cells that are being modified are typically from a patient who may be ill and the cells may be fragile. Our approach minimises stress to cells so they function extremely well when reintroduced to the patient.”

As well as delivering benefits to patients, the SOLUPORE® gene editing process is a shorter, simpler and much more cost-effective one than other processes currently available, offering the potential to deliver life-changing treatment at an affordable cost.

Having developed the SOLUPORE® platform, the next step for AVECTAS was scaling the process and aligning it to regulatory compliance to enable commercialisation. To achieve this, the company applied for support under the SME Instrument of Horizon 2020 and received additive funding of €2m.

The SME Instrument supports innovators to commercialise ground-breaking concepts that could shape new markets or disrupt existing ones in Europe and worldwide.

“This support was absolutely fantastic for the company at the stage we were at and for our ambition. It was as much about validating what we were doing as about the grant, as AVECTAS has always been very well supported by our investors,” says Maguire.

“Horizon 2020 is all about scientific excellence. The objectives and deliverables that were part of the project provided a structured framework and a discipline that was valuable to us. In addition, we felt trusted, supported and part of something bigger.”

As a result of the SME Instrument support, AVECTAS achieved a number of progressive strategic objectives. “The SME Instrument enabled us to accelerate our discussions with government agencies, academic institutes, regulatory bodies and other companies in the formation of a national strategy. There are very progressive efforts now across industry, academia and the funding community to join up the thinking around cell therapy and for Ireland to do the same in this field as we’ve done in biotechnology where we’re now a world player. It’s exciting to see what will come of that.”

Maguire is keen to encourage other companies to take advantage of the support available through Horizon Europe (Horizon 2020’s successor) but stresses that it should be viewed as additive rather than core funding.

“I feel strongly that companies need to have solid investment and avoid being dependent on grants such as Horizon funding. That’s not the right way to run a business and it can take you down avenues that don’t align with your company strategy. Additive funding such as Horizon Europe can allow you to accelerate progress but shouldn’t be the only source of finance,” says Maguire.

There is also much to be learned from the application process itself which hones focus and delivers fresh perspective.

“We made a number of applications for this funding before being successful and we learnt from the feedback on each of them, including how the outside world views your business. I would encourage people to be persistent and don’t get dispirited if the first or second applications are unsuccessful.”

AVECTAS has benefitted from a range of Enterprise Ireland support since its set-up and also got assistance with preparing the Horizon 2020 application.

Recently it has secured further funding through the Disruptive Technology Innovation Fund run by the Department of Enterprise, Trade and Employment. It is partnering with Bluebridge Technologies and NIBRT to expand its Solupore® platform to manufacture next-generation allogeneic products that can be produced at scale for large numbers of patients. The allogeneic approach uses cells from donor tissues rather than the patient’s own cells.

For further information about applying for support from Horizon Europe, the successor programme to Horizon 2020, please contact HorizonSupport@enterprise-ireland.com or consult www.horizoneurope.ie.