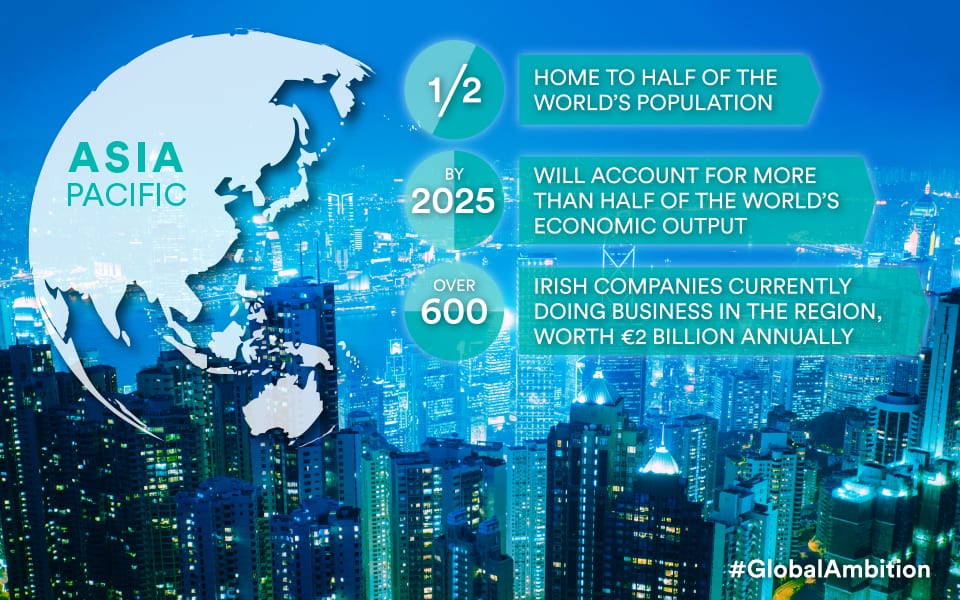 Payments company Fexco, one of Ireland’s oldest fintechs, began selling into the region in 2006, on the back of existing clients such as Jetstar, Australian carrier Qantas’s low-cost subsidiary.

Subsequently opening an office in Hong Kong, Fexco currently employs 20 people in what has become one of its fastest-growing divisions.

“In the beginning, we went out there with a kitbag bringing our services,” said Barry O’Sullivan, Fexco general manager.

“Now we have learned so much from the likes of companies like Tencent and Alipay that we are bringing more back in our kitbag from the region, that we can sell to Europe and the rest of the world. It has been a tremendous success for us.”

Fintechs interested in following suit need to be adequately resourced. “You have to invest. You have to take a long-term view and you have to put people on the ground and hire locally,” he said.

“Japan is wide open for Irish fintech. It has a huge financial services sector but a very small entrepreneurial sector. They simply cannot meet the demand for the fintech solutions that they require internally,” said Richard Okuno, a consultant with NMG Consulting.

The advent of Australia’s New Payments Platform, NPP, increases the country’s appeal for Irish fintechs too.

The recently launched platform enables customers with accounts at different banks, building societies, and credit unions to make payments to each other more easily, as well as providing real-time settlement via the Reserve Bank of Australia’s Fast Settlement Service.

It has proven transformational. “I can send money using an email address or mobile phone number,” said Paul Lahiff, NPP’s chairperson, pointing out that the new infrastructure is just that: “It’s not a product factory”.

Australian banks have spent the past three years connecting legacy systems to the new platform, and are only now investigating its potential to add value.

“While some applications can be done internally, we are also looking to partner with others outside, and we’re agnostic. So the best advice is for fintechs here to go there and talk because, having launched the railroad in February, the timing is right,” he said.

Because of the time it takes to generate business in Asia Pacific, which extends from Australia and New Zealand to India, China and South Korea, align stakeholder expectations before you go, advised Barry O’Sullivan.

“We followed our airline customers into the region and yet it still took three years before we saw any payback. But people in the region like to see that you have invested there, that you are going to stay around, and that you are setting down roots.” Use Enterprise Ireland’s assistance and tap into the Irish diaspora, he recommended.

Enterprise Ireland can also help with market research, which is important, given that there isn’t just one India but many regional variations, pointed out Deepak Sharma, chief digital officer at Kotak Mahindra Bank. A respect for local business culture is vital in each.

Part of what makes India unique in fintech terms has been the government’s move to take nearly 90% of its cash out of circulation in 2017. “That was a defining movement that accelerated the pace of change in the consumer mindset,” said Sharma. It left consumers with no option but to consider a move from cash to alternative payment methods.

The country also has an open payments infrastructure in place that allows for real-time gross settlement and national electronic funds transfer. “So, unlike other countries in which a payments company has to build the railroad and then figure out how to monetise it, the railroads are already there in India, irrespective of the customer market you are targeting.”

India has 400 million smart phone users, providing huge opportunities for mobile-first solutions. There is an appetite for innovative solutions, such as payment ecosystems which use biometric fingerprints, or QR codes too.

For fintechs to succeed in India four cs are required, he said. “The most important is the content. Do you have the right use case and the know-how to get into this market? Second, context: do you have an understanding that what works in one market won’t work in another, especially when you have quite different railroad and infrastructure which is already there.”

Third is commitment. “Once you get to the market, you need to look long term. India is huge. The price points are very different. Success does not come early. You are looking at large volume, low value, so you need to stick to long-term horizons. Finally, connect – at the end of the day, India is not one country. Just like the EU and Africa, it is distinctly different, so you need to think about how you will start building the kind of interfaces required.”

Collaboration and co-creation between banks and fintechs are key too, as is the importance of understanding the regulatory environment. “Pick up a partner or a sponsor bank who can help you navigate,” he said. “India is a very big market, it’s open for business, and a lot of fintechs from around the world are heading there.”