Following in the footsteps of Local Enterprise heroes 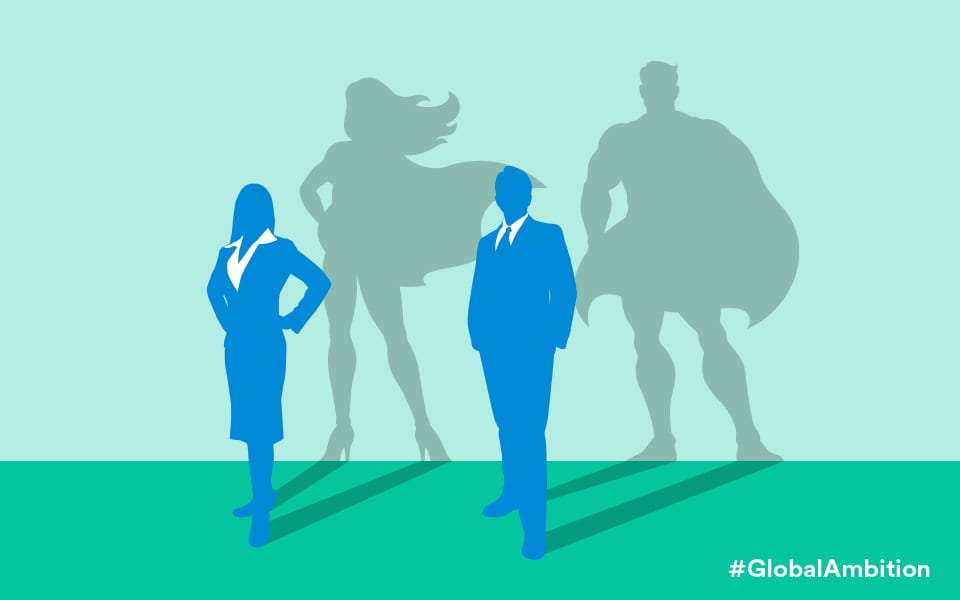 For many companies, becoming an Enterprise Ireland client is a significant step on a journey that started at a regional level. Local Enterprise Offices throughout Ireland provide supports, advice and training to start-up companies and existing micro-enterprises of up to ten employees. It is in this environment that experience is gained and vital lessons are learned which allow companies to prepare for growth and to take their ambition global.

A recipe for successful growth to €21 million annual turnover

It was in 1993 that a young man from Clonakilty got in touch with his Local Enterprise Office (LEO) in West Cork to ask if they could help him turn his business idea into a reality. Diarmuid O’Sullivan wanted to produce traditional churn-made yogurts. He knew how to make yogurts but he didn’t have enough funding to get the venture off the ground.

“I had the idea but not enough money,” Diarmuid recalls. “I heard there was funding available from the Local Enterprise Office, so I contacted them and put in an application. The maximum support they could provide at the time was £50,000 and the LEO in Clonakilty was able to help me put my ideas into a business plan to help secure funding.

“I also received quite a lot of mentoring and coaching. That was all done at concept stage – I hadn’t even identified a production site – but the support meant that I was able to get Irish Yogurts up and running by March 1994.”

Diarmuid’s yogurt-making idea was a recipe for success. His company grew quickly and its products were soon on the shelves of Irish food shops and supermarkets.

“In one of those early years, we grew by about 78.5%. That brought its own challenges, with regard to working capital. The Local Enterprise Office suggested that I move onto Enterprise Ireland, where there were financial supports for fast-growing companies which were creating jobs.

“We hadn’t really focused on exports, not at that stage. That came after we started working with Enterprise Ireland. Our first export customer in the UK was Tesco.”

This progress was recognised in 1998, when Irish Yogurts was named winner of Ireland’s first ever National Enterprise Award. In just a few years, it had gone from being a bright idea with insufficient funding to becoming an award-winning food producer.

Today, Irish Yogurts employs 160 people at its Clonakilty base and sells to every major supermarket chain in the UK and Ireland. Its annual turnover has grown from €300,000 to €21 million, with exports accounting for 30% of their business.

“We appreciate the input of the Local Enterprise Office and Enterprise Ireland, who supported us and our staff every step of the way,” Diarmuid says. “We still work with them and avail of supports and advice. Enterprise Ireland is very much a part of our team.”

A roll of honour

Irish Yogurts is one of hundreds of companies from every corner of Ireland that have transferred from Local Enterprise Office support to become Enterprise Ireland clients. Last year, 80 companies made the move. In 2016, the figure was 40. The roll of honour includes 10 other former winners of the National Enterprise Awards: 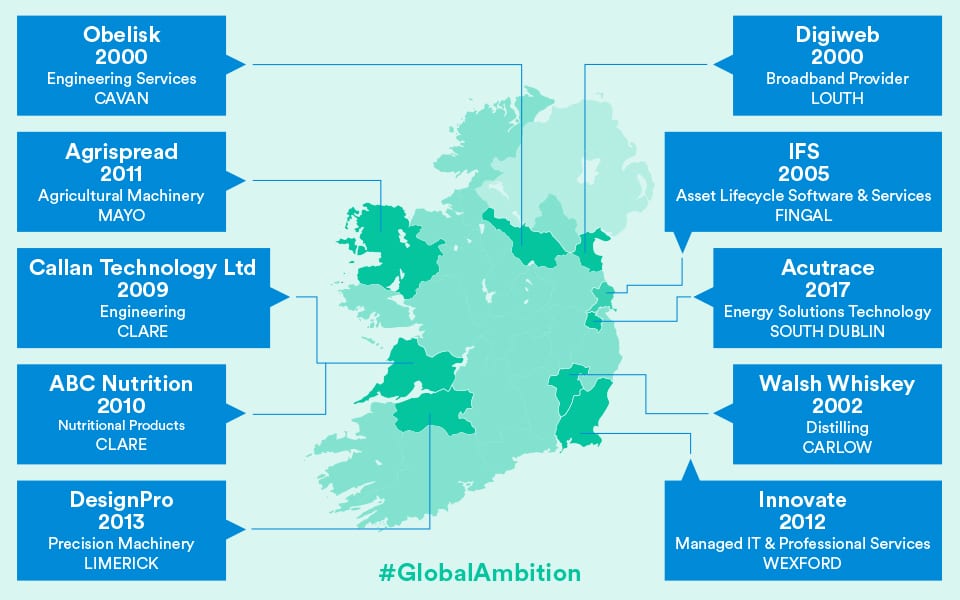 Engineering services provider Obelisk engaged with their Local Enterprise Office in Cavan, even before they set up the company in 1996. Four years later, Obelisk won the National Enterprise Award.

Founder director Colm Murphy said, “We were looking to capitalise on the growth of mobile phone usage by offering installation services for operators. The people in our LEO understood the idea that opportunity was coming down the track. That gave us the confidence that our idea was good and could to grow into something big.

“They had an incubator office which we were able to rent and provided grant aid for early employees. They also provided us with advice about how to set up a company, and other supports such as training and mentoring – there was a lot more to it than financial support.”

The support has been paying off ever since, Colm says. “Last year we turned over €27 million. Employee numbers are between 250 and 300 people. We’ve expanded to include infrastructure solutions for fixed telecoms and the energy sector in Ireland, the UK, and South Africa.

“We want to continue growing. We’re looking for further investment. Over the next two to three years, we’re looking to hit the €100 million mark in sales. Exports are currently a third of our turnover but we expect that to become a 50/50 split.”

So what part did being able to access business expertise and support at a local level play in the company’s success? “Back in 1996-97, we would have found it difficult to kick-off from a zero base,” Colm explains. “We were just a couple of guys with an idea, and sometimes going for funding and that kind of stuff can be daunting. But when you get the kind of support that we did from the Local Enterprise Office, that’s a massive kick start.

“I would recommend that any company should be in touch with their Local Enterprise Office. They’ve always been good at describing the product set they have and how they support you. If you don’t ask, you don’t get and if you’re not engaging with them then you won’t necessarily be aware of new supports that are on offer.”

The view that “if you don’t ask then you won’t get” is shared by John Lynch, Chief Technology Officer of Acutrace. The Dublin tech company provides software and hardware which allows companies to control and monitor their energy usage. They count the likes of Google, Twitter and IBM among their customers.

The company was growing quickly and the Local Enterprise Office was instrumental in steering Acutrace towards Enterprise Ireland’s High Potential Start-up (HPSU) programme.

John says, “Once we learned the criteria for the HPSU, we used that as our yardstick to reach for. We knew we had to have significant exports, we knew we had to have a scalable product that would generate employment and we needed to have the magic number of a turnover of €1 million, so it was a good objective to hit and we exceeded the target that year.

The advice, professional support and reassurance they received has left a lasting impression on John and Acutrace.

He says, “I’m coming off the back of 20 years in the industry and so is my business partner Aidan, but it’s a little bit different when it’s your own enterprise – the risks are higher and there’s an isolation you feel, it can be profound. Then you engage with your Local Enterprise Office and you feel part of something, that you’re being protected or mentored.

“There’s funding and that’s important, but it’s also having that extra bit of confidence that there’s someone else behind you who has your back, that if you are going to create employment, well there’s someone there who’s grateful for that and they’re helping you, and they’re encouraging you.”

“You might be destined for Enterprise Ireland but until you hit that criteria the LEOs will mentor you and steer you in the right direction.”

That direction involves advice and supports, which evolve and change to meet the needs of encouraging start-up companies and other micro enterprises of ten or fewer employees, says Oisín Geoghegan.

“We provide a very broad range of supports – initial business advice, information and guidance, training and mentoring, and financial supports such as feasibility, priming or expansion grants. It can include money to employ people or towards marketing costs, business development, and so on.

“We also point entrepreneurs and companies in the direction of other supports that are available, such as the New Frontiers incubation programme and Innovation Vouchers from other agencies such as Failte Ireland, Intreo, Bord Bia and Microfinance Ireland.”

“For companies with strong growth ambitions, we work hand in hand with Enterprise Ireland on their journey and ensure that they make that contact at an appropriate stage so their development continues to be supported.”