“You need to be completely dedicated to finding the solution, and you need to sacrifice a lot. It doesn’t matter if you’re a man or a woman, you just have to have that fire in your belly.”

If it takes a village to raise a child, as the saying goes, what exactly does it take to start and build a worldwide business? Support, dedication and even more support, says Leonora O’Brien, the founder of Pharmapod, a cloud-based system that aims to reduce medication errors by allowing healthcare professionals to record and share information with other healthcare professionals both within their country and globally.

“To succeed you need to make sacrifices and be dedicated to your business; it’s not for everyone,” she says. “There is support out there but you have to do the groundwork to find it. It’s up to you and your team to see what’s available and position yourselves to avail of it.”

Pharmapod offers a worldwide solution for a global problem

Pharmapod was established in 2012 with help and financial support from Enterprise Ireland, which has announced a new €750k Competitive Start Fund (CSF) for Women Entrepreneurs, opening for applications on 25 June 2019. The company aims to address what Leonora identified as a very real issue globally.

“Throughout my career as a pharmacist, I became aware of the issues regarding medication and patient safety,” Leonora explained. “At the same time, there was a growing legal obligation on pharmacists to record and analyse the risks to their patients. There was no solution in place, and being a chief pharmacist at Ireland’s biggest pharmacy chain at the time, I found that not having a system for recording patient safety issues was a real barrier for us as an organisation, and for the sector in general to learn and improve.

“You come across these issues on a daily basis, in pharmacies, hospitals and nursing homes, from the minor to the major, and many of these are preventable – we really needed a system that allowed healthcare professionals to learn from each other. Pharmapod is really fulfilling a need in the sector.”

The issue, Leonora says, is a global one – and Pharmapod is aiming to be the worldwide solution to the problem.

“To date, Pharmapod has been primarily active across three countries – Ireland, the UK and Canada – but we have recently signed a partnership agreement with the International Pharmaceutical Federation, The FIP, who has 144 members organisations internationally. We’re now starting to work through the different geographical regions with the FIP – for example the Middle East is a key focus area right now. No country is exempt from the issue – for instance, medical error is the third-leading cause of death in the United States – so this is a solution for a global issue.”

The system grew steadily from its beginnings in Ireland – the secret to its success, Leonora says, is a great team dedicated to the 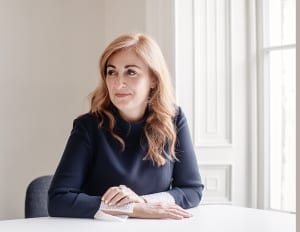 solving the problem. “We launched initially onto the Irish market, and had some really excellent, brave and innovative pharmacists in Ireland who understood the benefits of such a system and took it on at an early stage. We have 30 people on our team now, and we are constantly evolving the system, keeping our ears to the ground for changes in regulations and responding to feedback and new requirements from users.”

A key turning point was the launch of Pharmapod into Canada. “At the moment, 58% of community pharmacies in Canada are using Pharmapod – and that number is growing. Ontario mandated for the system to be used in 2018; they have 45% of the pharmacies in the whole of Canada, but we already have pharmacy groups using it on a pan-Canadian basis too.”

Having local support has been invaluable when launching internationally, says Leonora – and this is where Enterprise Ireland came in. “We went for the Competitive Start Fund at the start of the business, and all the way through, Enterprise Ireland has been a great support to us. The Canadian office was fantastic when we were launching in the country, giving us advice on the local market, supplying contacts and connections, and including us in local activities. They really are an extension of your team, a great support for companies expanding internationally. They’re so well informed and helpful, an invaluable resource.

“Initiatives like the CSF for Women Entrepreneurs are addressing a real issue that’s still there. We have to remember, this is not only helping fix things for women, in terms of effective supports and role models, it’s benefitting the economy as a whole,” says O’Brien.

“For us, having that government backup has been really helpful. It lends weight to our offering and adds to our credibility in the eyes of customers and potential investors who might not have been familiar with the company before.”

Leonora’s experience has taught her that the support is there if you look for it. “I believe the biggest barrier is in your mind. You need to be completely dedicated to finding the solution, and you need to sacrifice a lot. Not everyone is prepared to do that. It doesn’t matter if you’re a man or a woman, you just have to have that fire in your belly.”

And for female entrepreneurs, the business world has never been more accessible or attractive. “In a very short period of time, we’ve made a lot of progress, and a lot of that is down to us as a country shining a light on the issue. Initiatives like the CSF for Women Entrepreneurs are addressing a real issue that’s still there; fixing this issue will not only benefit the economy as a whole, but will also help the next generation in terms of female role models – and very quickly the world can change in that way.”

Enterprise Ireland’s €750,000 Competitive Start Fund (CSF) for Women Entrepreneurs is open for applications between 25 June and 16 July 2019. Under this CSF, up to €50,000 in equity funding is available to a maximum of 15 successful women applicants with early stage start-up companies. In addition, up to 15 of the successful applicants will be offered a place on Dublin BIC’s INNOVATE accelerator programme.