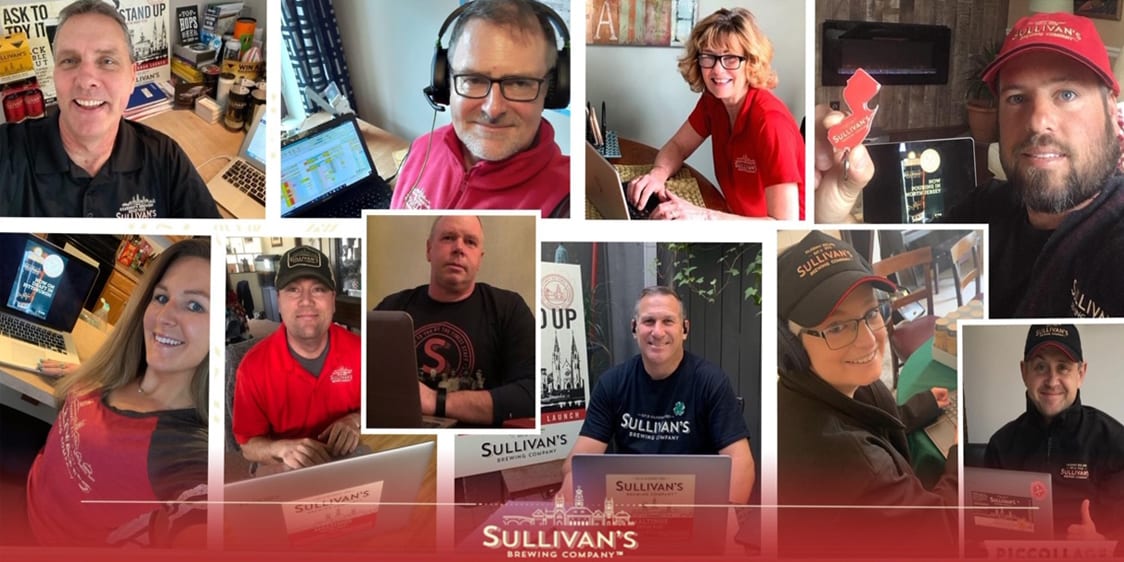 Sullivan’s Brewing Company, based in Co Kilkenny, has a fascinating history, dating all the way back to 1702. The company boomed through famines, fires, and wars, until one fateful day in 1918, at the end of WW1, an unfortunate member of the Sullivan family – a descendant of original owner Richard Sullivan – lost the business over a bet on a horse. Sullivan’s was then acquired by Smithwick’s, formerly a rival of the company.

Alan Quane says, “It was in 2016 when I had met Paul Smithwick through my work with Diageo and he told me he was resurrecting this great brewery. So along with Paul, his son Dan, who is our Finance Director, and Master Brewer Ian Hamilton, who has huge brewing experience internationally with Diageo, we relaunched the business.

“Then there’s Michael Meade, our US based co-founder, who was a strong believer and instrumental in fundraising from day one. Alan Smithwick, a cousin of Paul’s, was also a co-founder. Alan is not only a Smithwick, but also a Sullivan. So we have the Sullivan blood in the business which has led to our brand tagline of ‘brewing is in our blood’.”

With the help of Enterprise Ireland, who provided grant support, and Bord Bia, the team rebuilt the brewing business, with a real focus on exports. As soon as their ale was out their gates, they were exporting to the US, places such as Buffalo in Upstate New York. “Enterprise Ireland and Bord Bia were extremely helpful from the early days,” says Alan.

“We knew we had a great story to tell and we wanted to brew world-class quality beer to honour this heritage.” confirms Quane.

“In fact, in 2017/18, we won the best beer in the world competition at the Oscars of the beer world in Burton-on-Trent, amongst 1,300 beers from over 45 countries around the world.”

Silver lining to the Covid-19 crisis

Having been through difficult times, including the Great Famine and many a rebellion, Sullivan’s Brewing Co. is no stranger to challenges – so how have the company been coping during the Covid-19 pandemic?

“The on-trade shut down completely and utterly in all of our markets in the US, as well as Ireland,” says Alan. “The off-trade retail environment were very much focussed on big brands and boxes of the beer, so shoppers weren’t looking for ‘craft beer’ for the most part, they were really going after the deals and a quick-fire purchase.

“We had to move with speed into survival mode, cutting our overheads and any costs we could get at. From a supply perspective, we had created great momentum in the States up to St Patrick’s Day prior to the lockdown. We had nine new markets in the US alone year to date, on top of six new markets added in 2019. This had led to great strain on our supply chain.

“But during the lockdown, we were lucky enough to be able to brew here in Ireland and therefore we were able to build up the pipeline inventory for these US markets.

“In Ireland we also started selling our beer online direct to consumers’ homes, keeping the brand front-and-centre during these very strange and isolating times. That was a silver lining in a very dark cloud.” says Quane

Sullivan’s Brewing Company and family motto has long been ‘standing up to do the right thing’. Back during the Great Famine, the brewery was transformed into a soup kitchen to serve food for those most in need. And this trait has lived on today. During lockdown, the company went above and beyond to support the community in Ireland and the US.

“We sent pizzas from our Sullivan’s Taproom in Kilkenny to frontline staff at the regional hospital and Gardaí station,” says Alan. “We also contributed to the Answer Ireland’s Call charity, helping them repatriate much-needed frontline staff to Irish hospitals at the peak of the pandemic. Stateside, we helped deliver meals to people in need, for example, through the VA Medical Centre and Kenmore Mercy Hospital in Buffalo, NY. That concept of community has always been important to us and our sales team were very happy to try to help.”

So what has Alan learned from the pandemic?

“As a team, we have learned that we are very resilient,” he says. “The team and our plans pivoted quickly to focus on a new set of priorities in an unprecedented and seismic change to our customers’ needs and channel dynamics. As always, we’ve learned that innovation and creativity is central to how we respond to the fast-changing needs of our trade partners.

“We have also upweighted our activity on social media during lockdown, learning how to be much more effective in that channel for relevant brand news and engagement.” says Quane.

Alan says they now have plans to relaunch their route to market in Ireland. “We’ll service pubs and restaurants directly ourselves. We will continue to use C&C, our distribution partner for other opportunities, but by taking control of the bars and restaurants, I believe this will give us a chance to get even closer to our customers and their needs, and see how we can better serve them.”

Alan emphasises that a huge part of their future focus is exporting. “Having expanded to nine US markets in the early part of this year, on top of six last year, we have a lot of very new markets to nurture and grow. We’ve also plans to add more new markets in the US and look to the UK and Canada to continue to fuel our rapid expansion plans.

“Throughout these difficult past few months, we’ve maintained a very close relationship with Enterprise Ireland. They supported our very successful and latest round of funding. They’re a firm believer in us and continue to help us as we transition from a high-potential start-up into a successful scaled-up business.”