Commitment to France Pays Off for Tricel 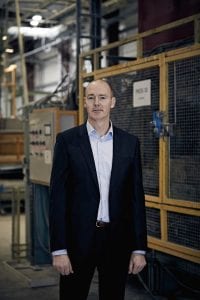 “In France, we are a French company with French people on the ground and a nationwide French distribution network. We have a very responsive business set-up providing next day delivery once a product is assembled.”

While attending a trade show in Evreux in France in 2009, Killarney-based manufacturing firm Tricel heard an announcement which would prove to be a watershed moment in terms of its growth in that market.

A representative from the Ministry of the Environment, Energy and the Sea told participants at the trade show that from that point on a government 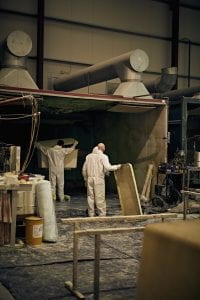 licence would be required for waste-water treatment systems for one-off houses in France.

Called KMG (Killarney Manufacturing Group) at the time, Tricel went about getting such a licence for its sewage treatment products – which it managed to do in 2011 – and the company’s growth in France took off from there. It secured a significant volume of sales in its first year, and sales have doubled year-on-year over the past four years in France, according to managing director Mike Stack.

Mike’s parents Con and Anne Stack founded Killarney Plastics in 1973 to manufacture high quality composite and fibreglass (GRP) products. At that time GRP was a new and innovative material to the Irish market.

The company went on to develop its own range of products – water storage tanks and meter enclosures – and built up a strong business supplying housing and commercial buildings in Ireland and the UK.

“Things were going nicely until the crash in 2008. Sterling devalued by close to 40% and almost went to parity with the euro in December of that year. This made UK companies more competitive and the market for houses and commercial buildings started to collapse rapidly from then on,” says Stack.

“We had to think about how we could reposition ourselves so as not to be so dependent on the UK. So, we looked to continental Europe and developed a range of environmental products, including the sewage treatment solution which has done so well in France.”

Top Tips for Exporting to France:

Tricel was one of the first companies from a country outside France to get the government licence mentioned above, which has allowed the company to build up a strong brand in the market since 2011.

“What has worked well for us has been the fact that our product is simple, robust and reliable. It is made with composite materials and high quality parts – people like the fact that they don’t need to adjust it or spend money maintaining it. This is also important for distributors who don’t want to have to make call-backs once a product is installed,” notes Stack.

Recognising that the French business was going to be substantial, Tricel established a factory in Poitiers in 2011. The group’s first factory on mainland Europe, the site acts as a commercial hub for France as well as a base from which to expand to other mainland European markets and French-speaking countries. Similar to the approach it took in the UK since the mid 1990s, Tricel manufactures all the parts in Ireland and uses the French factory for assembly.

Now with 25 people based in France, Tricel is in the process of kitting out a second plant in France, in Avignon. It has started recruiting for this new operation in the south-east of the country, which will play a pivotal role as a key assembly, logistics and distribution centre.

“In France, we are a French company with French people on the ground and a nationwide French distribution network. We have a very responsive business set-up providing next day delivery once a product is assembled,” says Stack. “This is important for distributors, which are mainly small businesses in local areas. It means we can get the tanks to them very quickly.”

“Last year we launched our new Seta waste-water treatment tank in France to meet the demand in the holiday home market. It is suitable for both constant and intermittent effluent use.” 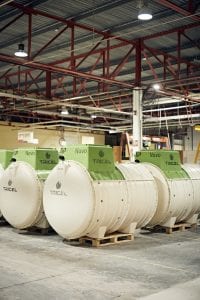 Further to establishing the Tricel brand for sewage systems in France and Germany the decision was made to rebrand the entire group to Tricel in 2014. It is now an established global provider of high performance solutions for the water, environmental, construction and materials industries with 12 operating locations across Europe.

Tricel currently employs 350 people, 134 of which are based at its headquarters in Killarney. “Since 2010 we have doubled our headcount and plan to employ 600 people across the group by 2020,” says Stack.

“Innovation will be the key driver of this growth. Over the past year we have switched from a cross-company approach to innovation to having someone with dedicated responsibility for this in each of the four divisions. A big thing for us has been to get better at measuring innovation and setting targets.”

The key to Tricel’s success in France has been being absolutely committed to the market since it first went there. “We have a managing director in France and the back-up of a lot of French-speaking staff both locally and in Killarney,” says Stack.

“We have taken a committed approach to all new export markets as we believe things don’t go so well generally if you just dip your toe in. In order for both customers and sales people to feel confident about our products, it is important for them to know that we have factories on the ground and people locally they can speak to.”

Covid-19: Returning to the workplace safely