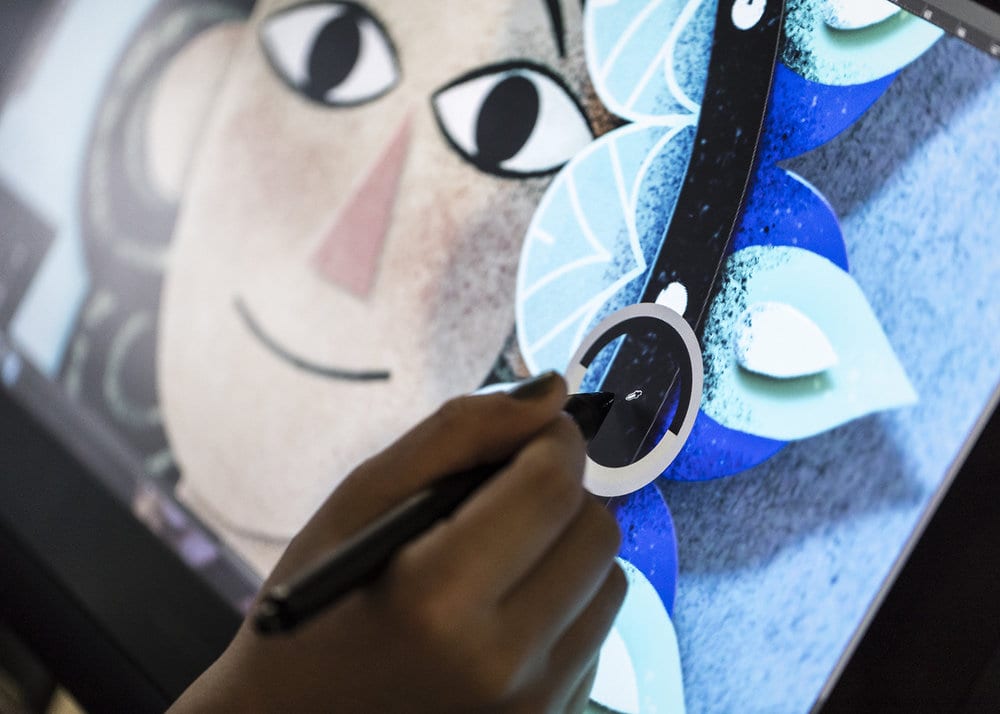 “We have a creation and design part, but we also have a production and commercial part. Those things must marry and live side by side.”

An animated fairy tale provided an unexpected twist in the story of Kilkenny-based animation studio Cartoon Saloon. The company’s 2009 film, The Secret of Kells, in which the unfinished Book of Kells is imperilled by Viking invaders and entrusted to the hands of a young hero, was nominated for an Academy Award – a remarkable achievement for the studio’s first production.

“The nomination was a surprise to everyone and it broke completely new ground,” says managing director, Gerry Shirren. He attributes success to the studio’s uniquely strong visual style. Since then, Cartoon Saloon has garnered another Academy Award nomination for its feature Song of the Sea and enjoyed commercial success with productions such as Puffin Rock. Two seasons, totalling 39 episodes, of the seven-minute cartoon were first screened on pre-school channels RTÉjr and Nick Jr in May 2015, and subsequently picked up by Netflix for worldwide streaming the following September.

The studio clearly has outstanding creative talent but it’s also a for-profit business. “We call it a creative enterprise,” says Shirren.

“We have a creation and design part, but we also have a production and commercial part. Those things must marry and live side by side.”

It’s been a successful pairing. Puffin Rock was launched in China by a leading streaming service in August 2017 and has since had a streaming rate of more than one million views per day.

Cartoon Saloon has always innovated, creatively and technically. “We moved really quickly to digital delivery about five years ago when broadcasters were still looking for physical delivery. Now digital is the norm,” explains Shirren.

Early on, the company received RD&I grant assistance from Enterprise Ireland to evaluate and implement a digital management pipeline. This proved essential for efficient production. “We were looking at customisable software which needed to be heavily modified for our own processes,” says Shirren.

“The funding brought us into the realm of digital management systems which we hadn’t used before.”

It was another step on the path to a more professional, streamlined production process. “When funds are in short supply, that sort of support makes a difference. I don’t think we would have got through the implementation of the visual system without it,” adds Shirren.

More recently, the studio received a grant from Enterprise Ireland to embark on a small feasibility study, a sort of voyage into the unknown. “We wanted to find out whether we could port over to a virtual reality environment,” explains Shirren. A showcase piece was created, based on a virtual reality world inspired by Song of the Sea, and is now available for VR and Gear VR mobile platform, both free to download from the Oculus Store.

“It was a speculative project and we couldn’t have done it without support,” Shirren continues. “We learnt an awful lot from the process.” Anyone who has an Oculus Rift headset can now experience the studio’s creation.

Cartoon Saloon’s latest film, The Breadwinner, was launched at the Toronto International Film Festival in September 2017, and a new film, Wolfwalkers, is currently in production. The studio has also formed a joint venture, Lighthouse Studios, with Canada’s Mercury Filmworks to do third-party service work which may involve animations for big hitters such as Amazon and Disney. “In about twelve months, Lighthouse could be as big as Cartoon Saloon,” says Shirren. “That means Kilkenny could have two animation studios with perhaps 100 employees each, making the city a magnet for talent.”

Learn how Enterprise Ireland can support your R&I ambition with dedicated innovation funding.