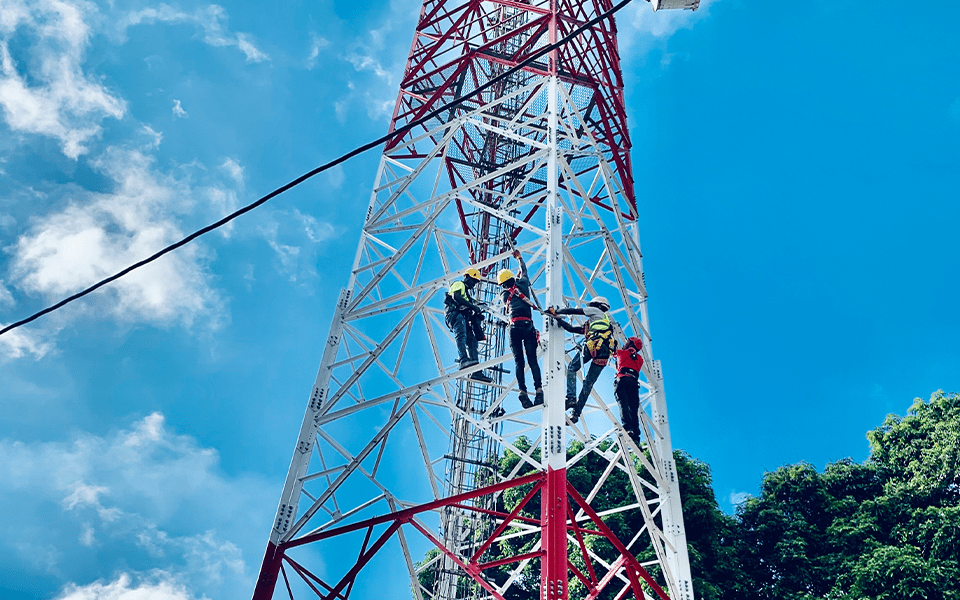 “People will have ideas, you have to give them the environment to throw them out there. The best ideas come from the people actually doing the work. The guys on the ground. Never ever squash an idea. You’ll never create a good culture doing that.”

Delmec, a global telecoms solutions company, headquartered in Carlow, was faced with a problem. Their engineers were recording data manually while doing survey work for tower owners and mobile network operators in Africa. It was leading to vast amounts of paperwork and it was unsustainable.

Head of Engineering and Innovation Damien Kelly explains: “It was a long drawn out process, our teams had to capture all the details on site, on paper. They’d then go back to the hotel or office, take photographs or scans of the survey and send it all to our design office, who had to try to read the information, model the tower, analyse it and write up a report.”

Handwritten data resulted in inconsistencies and the sharing of data post-survey led to delays.

Delmec had to find a way to make their data capture and sharing process more efficient. By doing so, they could speed up their operations and then scale the business. Enterprise Ireland’s Agile Innovation Fund was there to help.

Delmec has a Telecoms Infrastructure Management system (TiMS). A cloud based assessment management system; it allows clients to monitor tower capacity, view
maintenance schedules and input trouble-tickets for thousands of telecommunications masts around the world. The company wanted to develop an app that would replace the old paper-based and manual way of working, and work in tandem with TiMS.

“The teams all had phones, we wanted to see if there was a way to automate things onsite and to capture the information digitally by tapping into the TiMS system,” Damien says. “We knew it was going to be a large undertaking. But we needed to jump on it because it was going to build the business for the next five to ten years.” he says. But there were doubts over changing familiar ways of working and the level of investment required. “We knew it was going to be a long journey and we needed buy-in from everyone to be able to do it,” Damien says.

A partner in change

After some research, Delmec signed up to a webinar to find out about Enterprise Ireland’s Agile Innovation Fund. The company liked what it saw and applied. The process from application to decision was quick, only taking four months to complete.

The application for the fund also helped Delmec map out the project. “Part of the application process involves scoping. By doing that, you’re then visualising what it is and you’re identifying problems,” he says.

“Enterprise Ireland holds your hand through the whole thing, there’s a lot of work but you’re not on your own,” Damien says.

Once the Agile Innovation Fund was secured, the internally-named ‘Eiffel’ project got underway. As with any app build, there were different iterations; it took eight months to complete its first stage.

“It opened the floodgates to everything,” Damien says. Their design teams could access data in real-time and client partners were wowed by the speed of the process. The Agile Innovation Fund enabled Delmec to scale, they secured new contracts in Asia and the Middle East and they are now planning to expand to Europe.

The streamlined process means it can work with contractors in remote locations if needed. This proved to be essential when Delmec couldn’t dispatch their teams to towers due to local COVID-19 lockdowns. “If we didn’t have the app, I don’t know what position we’d be in now. We rely heavily on it,” Damien adds.

Delmec has built on the functionality of the app, moving it from a real-time data capture and sharing tool to something much more powerful. It not only drives efficiency throughout the entire business, it now drives ideas. The app tracks suggestions from team members who think something could be done better, everyone from accountants to engineers are encouraged to input.

The Eiffel project has also changed the mindset of the team. They have seen the benefits of embracing innovation and want to continue to evolve. It has given the business an edge over risk-averse competitors who are slow to embrace change.

How can other businesses nurture an innovative mindset? “People will have ideas, you have to give them the environment to throw them out there,” Damien says. “The best ideas come from the people actually doing the work. The guys on the ground. Never ever squash an idea. You’ll never create a good culture doing that.”

To find out more about Enterprise Ireland’s Agile Innovation Fund, contact your Development Advisor or call our R&D unit on 01 727 2120.