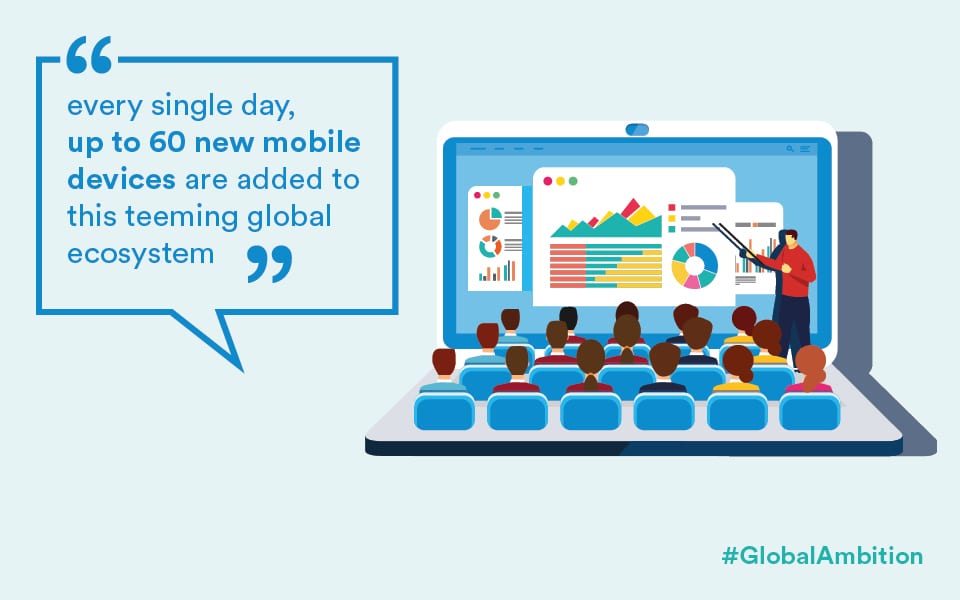 Irish start-up DeviceAtlas emerged from humble beginnings. It began life with four employees and a borrowed internet router, working out of a one-room office above a travel agent on Dublin’s Dawson Street.

The company may have started small but it had a big vision – and a steely belief that the world was going mobile. It may seem obvious now but back in the pre-iPhone days of 2006 nobody could tell how far mobile technology would go, and how fast the device population would grow.

DeviceAtlas knew what was coming. The company was formed as part of the dotMobi domain initiative, with a mission to take the pain out of device diversity. It was a tough sell in the beginning, not least because most companies had yet to experience that pain.

“That was probably the biggest bump we faced in those early days, a lack of belief that the technology would evolve to this point,” says DeviceAtlas CTO, Ronan Cremin. “Companies just didn’t believe that they’d need this sort of help.”

As the technology exploded, and devices began to proliferate, the vision started to make sense. “Of course, all the things people said would never happen have now happened, but the lack of faith was a big obstacle,” says Cremin. “We trusted in the vision though, we had complete belief in what we were doing and that made sure we never got knocked off our path.”

Today, DeviceAtlas is one of the world’s foremost providers of mobile device data. The company supplies detailed information about the nature and capabilities of connected devices – as of today, they cover more than 50,000 different devices – to give clients deep insights into their mobile traffic and usage patterns.

The company accumulates data from a global network of websites and apps that monitor traffic and identify devices that have not been seen before: some 50 to 60 new devices are launched every single day. It is exactly the scenario the company envisaged a decade ago, when they were knocking on doors.

“All connected devices have different characteristics and different capabilities so for any company trying to keep track of them all, it’s a headache – it’s messy,” says Martin Clancy, the company’s marketing chief. “Our mission is to recognise what each device is and what it can do, and in that way bring order to chaos for our clients.”

Growth has been smooth and steady over the past decade, but the company still acknowledges the foundational role played by Enterprise Ireland, which stepped in to provide funding for early-stage R&D  recruitment. “Thanks to Enterprise Ireland, we were able to hire the right people who could build the technology quickly, which was critical to our launch plan,” says Ronan Cremin.

“The funding was the obvious one but Enterprise Ireland also gave us lots of advice and guidance that was really helpful,” he says. “For example, when we were trying to break into the Chinese market they added heft to a lot of introductory meetings as well as giving us tips about adapting to the local culture. Small but invaluable things that made a difference.”

These days, DeviceAtlas needs little introduction. The company counts nearly a quarter of the Fortune 100 among its client roster – with companies such as Adobe, Amazon, AOL/Oath, Appnexus to take just the start of the alphabet – and estimates that its technology is used by “most of” the Fortune 1000 via its OEM customers. Incredibly, some 1 in 3 of all digital ads are underpinned by DeviceAtlas.

From four people, the DeviceAtlas team has grown to more than 50 – a rising total that includes an impressive 18 nationalities so far – serving customers in 56 countries worldwide. And as ever more devices populate the landscape – not just smartphones but game consoles, TVs, watches, speakers, anything connected – there appear to be no limits to what the future holds.

“The direction of our industry is clear – everything’s getting smaller,” says Ronan Cremin. “Mobile technology is sinking into the woodwork, if you like, it’s becoming invisible. One of these days, you might open your box of Cornflakes and find a free mobile connected device in with the cereal!

“I know it sounds far-fetched and we’ll have people telling us ‘It can’t be done’, just the same as they did when we were starting out,” he goes on. “But in this business you can’t rule anything out. There’s a line in the movie Jurassic Park that I always remember: life finds a way. Well, technology will find a way. And probably sooner than you think.”