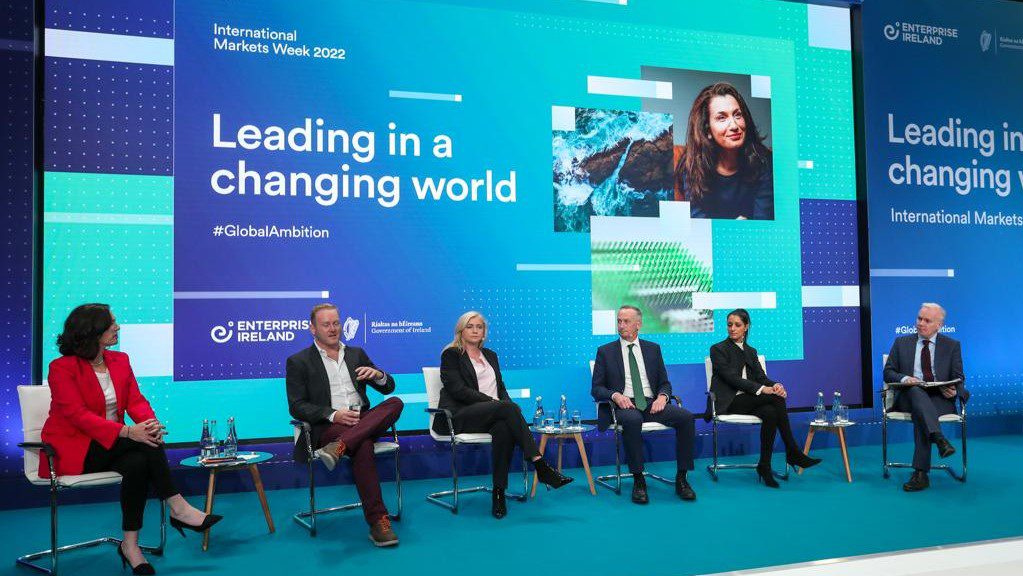 While Ireland saw soaring exports in 2021, there’s no doubt companies everywhere are facing headwinds in the coming year. A recent Enterprise Ireland client company survey found that 35% view global market and economic uncertainty as the primary challenge for their business for the next six months. This survey, which was carried out before Enterprise Ireland’s recent International Markets Week (IMW) event, also found that one in three (32%) had expressed concerns about supply chain, price inflation and energy costs.  While one in four (26%) pointed to skills and talent shortages as being the biggest challenge to their business.

Help was at hand, however, at the recent International Markets Week (IMW) event, which took place at the RDS in Dublin from 11th – 14th October. The four-day event saw hundreds of Irish exporters getting expert advice on their export strategies from Enterprise Ireland’s team of global market advisors from our network of offices around the world.

“IMW has run annually for over 20 years and this year’s event was the biggest ever,” says Tom Cusack, Divisional Manager, Global Markets, Enterprise Ireland.

“Not only that, but this was also the first time since the pandemic that the event took place in person. Last year, we held more than 1,600 virtual meetings during IMW. These were hugely beneficial, but our clients were also keen to return in-person consultations this year, and we held about 1,800 of those during the week at the RDS.”

Timely advice from around the world

Over the course of this year’s successful IMW, more than 600 Enterprise Ireland client companies held one-to-one meetings with 130 of our market advisors, who travelled to Dublin from our network of 40 market offices across Europe, the Middle East, Africa, Asia Pacific and the Americas.

While exports from Enterprise Ireland client companies rose by 12% to €27.29 billion in 2021 – the highest ever level of growth in export value– the forecast slowdown means it’s timely for businesses here to assess and, where relevant, formulate their export and internationalisation plans for 2023.

During their face-to-face meetings with some of our market advisors attending IMW, attendees were able to work out the most high-impact strategy possible for each individual market to which they export to or are currently considering for market entry.

“We have consistently seen that having a joint action plan with Enterprise Ireland significantly strengthens a company’s opportunity to grow and scale internationally,” says Tom.

Despite the challenging economic environment, there was a buoyancy among our client companies about future business sentiment and optimism.

Nine-in-ten (91%) said they expect their exports to increase next year. Almost two-thirds (59%) said their export sales have increased so far this year when compared to last year, and almost one-third (32%) said they have remained stable.

Most of the exporters we surveyed (84%) plan to enter new markets in 2023, with North America highest on the list, followed by Europe and the UK. Two thirds (62%) of those planning to enter new markets told us that expanding their overseas market presence is their biggest priority for the next year.

Taking the leap into export

This year’s event also included a schedule of meetings for companies that are currently focused solely on the domestic market, but that have the ambition to export and scale internationally.

These meetings were designed to help them understand their value proposition and potential channels to market.

“Our market advisors were also able to support these potential exporters as they considered how to kickstart their market research and gather market intelligence,” says Tom. “Doing that will enable them to assess which market to target first and how to approach the market entry plan.”

Those attending IMW were also able to drop into the Global Ambition lounge, where they can meet with specialist advisors to drill into specific areas of interest where they might be.  This included areas such as sustainability, digitalisation and how this can drive competitiveness.

Almost three quarters of the businesses surveyed (74%) said that having green credentials with a sustainability policy in place is considered an important factor when competing to win new business overseas.

“Other specialist sessions revolved around how companies could attract, retain and develop the right talent within their organisation,” says Tom. “Sales and marketing were also a focus of specific meetings, as was procurement.”

Funding for international growth is, of course, also an area of interest for exporters that are eager to grow their overseas sales, and relevant experts were also on hand to advise on this.

Global marketplaces, such as Amazon, are becoming increasingly vital online sales channels for many Irish exporters, and companies that went to IMW were also able to arrange meetings with experts on this sector.

Whether it’s advising existing exporters or supporting the next generation of would-be successful exporters, time and again International Markets Week has proven to be an invaluable event that ultimately helps to support ambitious Irish entrepreneurs on their exporting journeys.