Fuelling your company’s growth in AsiaPac 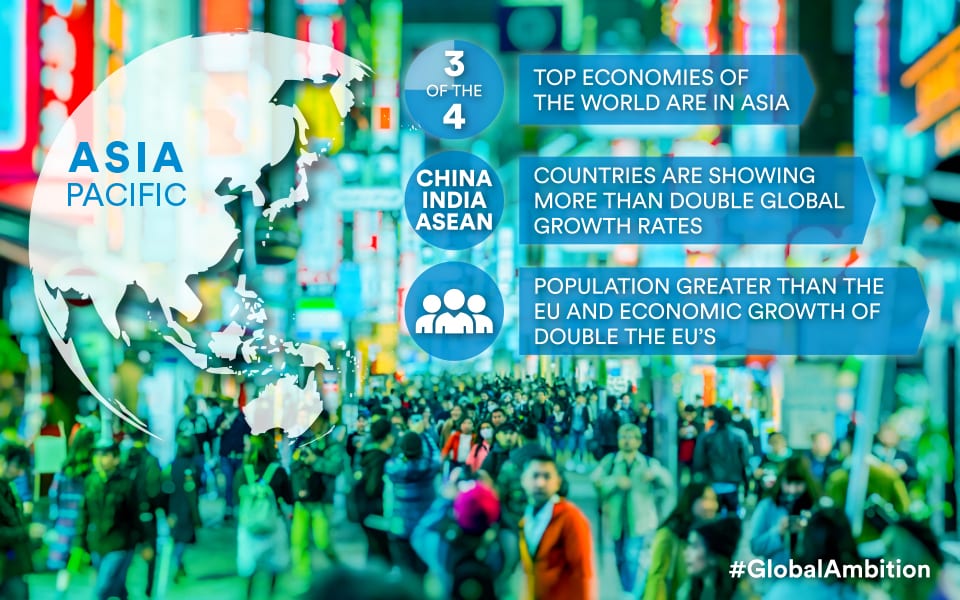 The size of Asia reflects the scale of the opportunity it presents to Irish businesses, delegates at Routes to Growth AsiaPac, a major conference held in Dublin’s Aviva Stadium, heard recently.

“Three of the four top economies of the world are in Asia. It accounts for half the world’s population and a growing middle class,” said Julie Sinnamon, chief executive of Enterprise Ireland, which organised the event.

“China, India and the ASEAN countries are showing more than double global growth rates, so they are not alone large markets but ones have massive growth within them. And ASEAN is one of the world’s largest economic zones, with a population greater than the EU and economic growth of double the EU’s.”

But there are challenges too.

“With Asia, you can’t go in, do a bit of business, and come home. You have to be really committed to the market. You need a balance sheet that can withstand the investment and you need an understanding of the culture,” she said.

There are logistical challenges related to distance, cost, lack of relationships and the need for a local presence. It’s not a homogenous block either. “Each of these countries has different culture that we need to recognise and appreciate. The Western mentality – believing we have the answer to your problem – doesn’t go down well in AsiaPac, you have to listen, and have patience.”

Be aware of distinct operational requirements in markets such as China, said MJ Guan, a partner at the China Ireland Growth Technology Fund.

It isn’t a question of simply translating your marketing materials but of doing first hand, on the ground market research for yourself. “Don’t just rely on third party agents,” he said.

Localisation requires much more than translation too, as companies such as Google and Uber have discovered. To assume that just because your business is successful in the Western world it will be successful in the AsiaPac region is a mistake.

Trip wires can include not finding out if you can get a direct licence to operate in your sector, and, if not, partnering with a local business. If you sell B2B get your “China Pricing” right. “In China we like to ask for a high discount from a vendor. If you don’t give a discount the customer may think you are not serious about the business,” he said.

Guan was at the event representing the second China Ireland Growth Technology Fund, which is newly launched. It aims to support Irish companies looking to access the Chinese market, as well as Chinese firms looking to use Ireland as a European base.

The new Fund will once again be co-managed by Dublin-based Atlantic Bridge and Beijing-based WestSummit Capital.

The sectors it is open to applications from are quite wide, said Elaine Coughlan, founding managing partner of Atlantic Bridge. They include agri-tech and med-tech, enterprise and consumer software, semi conductors and industry-4.0 “all the things China wants access to and wants to buy,” she said.

Even where a company is not ready for investment, the Fund can help applicants make contacts and start building crucial relationships.

“It’s very rare we say ‘no, never’. We say ‘not now, come back to us’, and give them some pointers to think about in terms of execution. We’ve a portfolio now of companies – of CEOs, VPs (vice presidents) and BDs (business development executives) – who are in China and who can share that knowledge with other Irish companies.”

One company the Fund has already invested in is indoor positioning systems company Decawave, which currently has five people based in China.

“You need to get out there on the ground so use Enterprise Ireland and the Department of Foreign Affairs and all the resources open to you. There is always someone who can give you introductions,” said Paul Costigan, chief sales and marketing officer at Decawave.

Its technology is based around “really precise GPS that works indoors, with very many applications for robotics, drones, AI, automation and smart factories, all the areas that China is so far ahead in,” said Costigan. In fact, “China already accounts for 60% of our revenues and we haven’t even got going yet.”