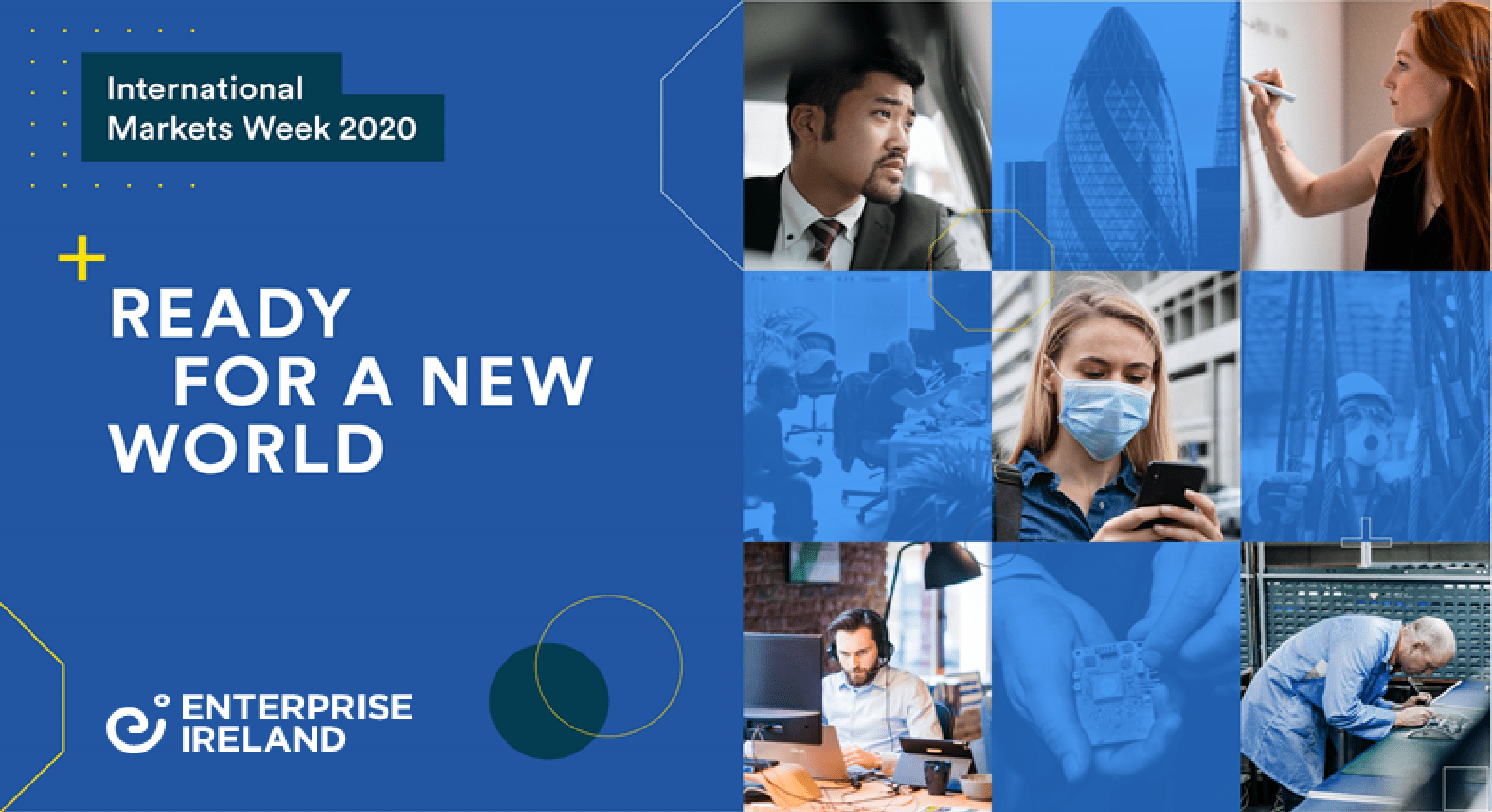 The role played by innovation and ambition in helping companies to internationalise was the theme of “Ready for a New World”, a major virtual conference which marked the launch of Enterprise Ireland’s International Markets Week 2020.

More than 700 companies logged on for the panel discussion with the founders of some of Ireland’s most successful international exporters.

They provided insights into not just the scale of their ambition but of the ways in which they innovated, and in some cases pivoted, in order to achieve it.

Tim Houston, CEO of Clonakilty based Global Shares, expressed his ambition to see the fintech become a ‘unicorn’, or billion dollar company.

It started out in 2005 as a provider of services in the area of employee share options. By 2015 it had perfected and launched a platform to simplify the share ownership process for both employees and employers, all over the world. “Since then we have never looked back,” Houston told delegates.

Today it is one of a handful of global providers in its market and competes against major legacy providers such as Merrill Lynch, UBS and Morgan Stanley.

“We don’t have the big brand but we do have the speed to market and a great team.” – Tim Houston.

“We don’t have the legacy platforms that some of these big banks suffer from either, so that’s how we compete. And where we can’t compete with them we partner with them,” he explained.

It’s a strategy that has put the fintech on track to grow employee numbers from 370 currently to 1000 in the coming years.

Nicola Mitchell, CEO of Life Scientific, an agrichemical company, said her company was set up in 1995 to provide contract research services to a number of sectors but has grown by focusing on designing innovative versions of off-patent crop protection products.

In the process it has injected competition into an oligarchic market, to the benefit of farmers around the world.

Making the transition involved giving up the valuable contract work it carried out for multinational agrichemical clients in order to realise its strategy. It’s always a tough decision for any business but it has paid dividends for Life Scientific.

It did just that. Life Scientific Germany launched two years ago and went to Euro 10m sales very quickly while, in 2014 she sold half the business to InVivo, a Euro 6 bn French co-op with 5,000 employees, in exchange for market access in France.  “Without this we wouldn’t have jumped from Euro2m to 60m. We’ve a very healthy business in France and a very healthy partnership,” she said.

“The single most important thing we can get right as a virtual type company which invests in R&D and sales & marketing alone, is to be able to find the best partners, whom we can work with the best, and go fast. (France) has been a great poster child for our global expansion.”

Kilkenny’s Modubuild transformed what was a domestically focused construction firm by winning its first contract overseas, to build a high tech data centre in the Netherlands, in 2015.

Today 70% of its turnover comes from exports. It provides both on-site modular construction and off-site construction at its facility in Castlecomer where it can design, build and ship at speed.

The company employs 300 people and has been helped in its overseas expansion by Enterprise Ireland’s teams on the ground, CEO Kevin Brennan told delegates.

“When we entered the Netherlands market in 2015 our turnover was Euro 1.5m. We have grown 60% year on year since we started working internationally and this year we expect it to be around Euro 34m, and Euro 50m next year,” he said.

Aerosol drug delivery company Aerogen employs 300 people, including 200 in Galway and 100 in commercial offices around the world, founder and CEO John Power told the conference.

Its products are included in all major manufacturers’ ventilators. “We’re the ‘Intel inside’”, he said. The company ships to 70 countries and, as a result of Covid, in the second two weeks of March alone received the equivalent of half a year’s orders.

But Power is intent on moving the business further up the value chain from being a drug delivery systems provider to becoming a speciality pharmaceutical provider too, he told delegates.

Innovation helped many of the companies showcased to power through Covid. Global Shares had already migrated its staff to remote working in 2019. This year has been the company’s “best new business year ever,” he explained.

“Our strategic plan is to focus on the four largest economies in the world, China, Japan, North America and Europe and we try and stick with just those.

“That said, during lockdown we won the largest company in the world, in Saudi Arabia, which we ostensibly won over the phone,” he said.

Covid has seen data usage grow exponentially, fuelling demand for data centres too. Once Modubuild won its first contract overseas in 2015 it continued to grow, both as a result of follow on business, as his clients grew, and by winning new clients.

“Once you break into it, it’s a good industry to be in. We gained a reputation as a company that could deliver internationally, so we are now working for multiple clients in multiple countries throughout northern Europe and we expect to move more towards southern Europe too as the data centre industry moves more towards African markets,” said Brennan.

As a design engineer by training, John Power’s primary innovation in Aerogen was to spot the opportunity to create an entirely new product category, aerosolised drug delivery for ventilated patients. As a result of this, the company has no direct competitors.

But whatever sector you are in, being the best is the only secret of success, he suggested.

Innovation, research and development is the key to delivering that, he said.

“We have a big team of research scientists in R&D, electronics, software and mechanical engineers. We keep developing new products, and new iterations of existing products, and diversifying across the hospital.”

In fact, the major innovation Aerogen has made is into funding its own drug trials, including one he predicts will have the biggest impact on neonatal care seen in 50 years.

“It’s about R&D and keeping moving up the chain. You want to be your own boss, you don’t want to be reliant necessarily on others. The way you do that is you innovate and come up with the best products in the world,” he said.

It’s a sentiment Kevin Brennan endorsed. Construction is an inefficient industry, which is why Modubuild invested heavily in its off-site manufacturing facility, bringing high tech construction back to a factory environment, with a team dedicated to innovating new ways to construct facilities.

That is paying dividends for its clients. “We just delivered a vaccine laboratory for a multinational client, designing and building it entirely in our factory and then shipping it out and constructing it on site in 10 days. That allows our client to get to market a year quicker than it would traditionally,” he said.

“It’s very important for us to be continually innovating, looking for new and quicker ways of delivering projects for our clients. – Kevin Brennan”

Enterprise Ireland chief executive Julie Sinnamon, who hosted the panel, said the common denomination in all of the companies featured was innovation, “not just in product or service but also in business model.”

But their success was about more than innovation alone, she added.

“What is also coming across really strongly is the importance of ambition. One of the big challenges we have is not having sufficient Irish companies of scale. Each of these panel members has a very clear view. They want to be in control of their destiny and they really have a very strong strategy to build a company of scale in Ireland. It’s great to see that being done in Dublin and the regions.”