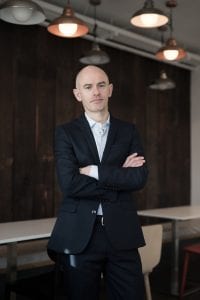 “We had started doing a lot of data centre projects for US multinationals in Ireland so we decided to look at the Netherlands as Amsterdam is a hub of activity for data centres.” – Paul Butler, director, Linesight

Five years ago Dublin-headquartered firm Linesight decided to go on fact-finding missions to the Netherlands with the help of Enterprise Ireland. It was a move which has led to around 70% growth in its fee base in that market since then and an increase in its team based there from four to 30 people.

Originally established in 1974 as Bruce Shaw, Linesight rebranded in 2016 with a view to having a name that could be owned in all markets. The name Linesight was inspired by the company having its clients’ goals in their direct line of sight from initial concept through to successful project completion.

With staff located across Europe, the Middle East, Asia Pacific, and North America, Linesight increased its global headcount by 135 and recorded turnover of about €60m for the group in 2016. It now has 17 offices around the world and has delivered projects in 40 countries.

Linesight’s growth in the first 30 years or so was mainly focused on Ireland and the UK where it established a number of offices. When the recession hit in 2008, it had built up a 25% market share in the domestic market for professional services to the construction industry. It had also generated a limited amount of international business.

The downturn in construction at home prompted the company to look at international markets more keenly and the Benelux region – and the Netherlands in particular – seemed a promising area to focus on. It had worked on five or six small projects there, but further to building up expertise and skills in data centre projects it saw an opportunity.

“We had started doing a lot of data centre projects for US multinationals in Ireland so we decided to look at the Netherlands as Amsterdam is a hub of activity for data centres,” says Linesight director Paul Butler.

“In addition, a lot of pharmaceutical multinationals were starting to set up subsidiary plants in the Benelux region. We recognised that we had the relevant in-house expertise and key staff delivering professional services in these areas. We wanted to retain that staff and the Netherlands was of particular interest to us.”

Over the years Linesight had established a partnership approach with clients based on consistency and clarity, and it has a proven track record in terms of quality and timely delivery of projects. This stood to the company when it came to building business in the Netherlands.

“For some of our clients developing projects in the Dutch market we were preferred bidders and travelled there with them as part of their team, offering the same service as we had in the Irish market,” Butler explains.

“Other projects involved competitive bidding as companies may have had their own in-house auditing functions – but we were also very competitive in winning that work.”

Some multinational clients even requested that certain individuals from Linesight work on projects with them in the Netherlands, Butler adds, “Our people are key in terms of generating repeat business. Senior project managers see projects through from cradle to grave and directors oversee projects on a 24/7 basis. The personal relationships built up over time have been very important.”

The Netherlands has been a relatively easy market for Linesight to enter as English is widely spoken and its framework in terms of contracting is similar to Ireland’s. “Being fluent contractually is a different thing than being able to speak a language. In other European countries language can be a barrier in this respect. We demand that contractors deal with us in English in the Netherlands,” says Butler.

That being said, once Linesight started to focus on the Dutch market, it invested a lot of time in ensuring it had the right contractors and partners to deliver projects to the standard required. It also had to get to grips with different regulations in relation to construction, planning codes and timeframes.

“Even within the Netherlands different regions are more regulated in terms of construction. For example, near the German border there is still a lot of heavy industry, which contrasts with the Amsterdam area,” says Butler.

“We had to stretch our web of contractors beyond the Amsterdam area. Now we have a high level of tried and trusted partners in the Netherlands that we know will deliver for us.”

Now that Linesight is established in the Dutch market it is looking at new opportunities within its existing client base, such as in the retail and pharmaceutical sectors. It also wants to take advantage of some new areas, in particular in relation to the local supply chain and newly built logistics centres.

“There are some very good companies competing with us for business. What differentiates us, in addition to our people, is the fact that we are an all-in company that can provide cost management, project management and risk assessment. This is vital for a lot of big multinationals,” notes Butler.

“A significant proportion of our people have backgrounds in civil, electrical or mechanical engineering – so our service is not just about number crunching, they can understand the design. They can go through drawings with clients in great detail and are fluent in engineering language.”

Gaining a foothold in the Netherlands has led to Linesight building business in Germany and Belgium. Once clients’ projects are completed in the Netherlands, it has extended its network to continue working with them in other locations.

“They want the consistent, clean approach of dealing with us, rather than having to educate a new local provider in their needs and ways. The flexibility of our people and operation has been key to our success.”