Market Watch – A view from Canada 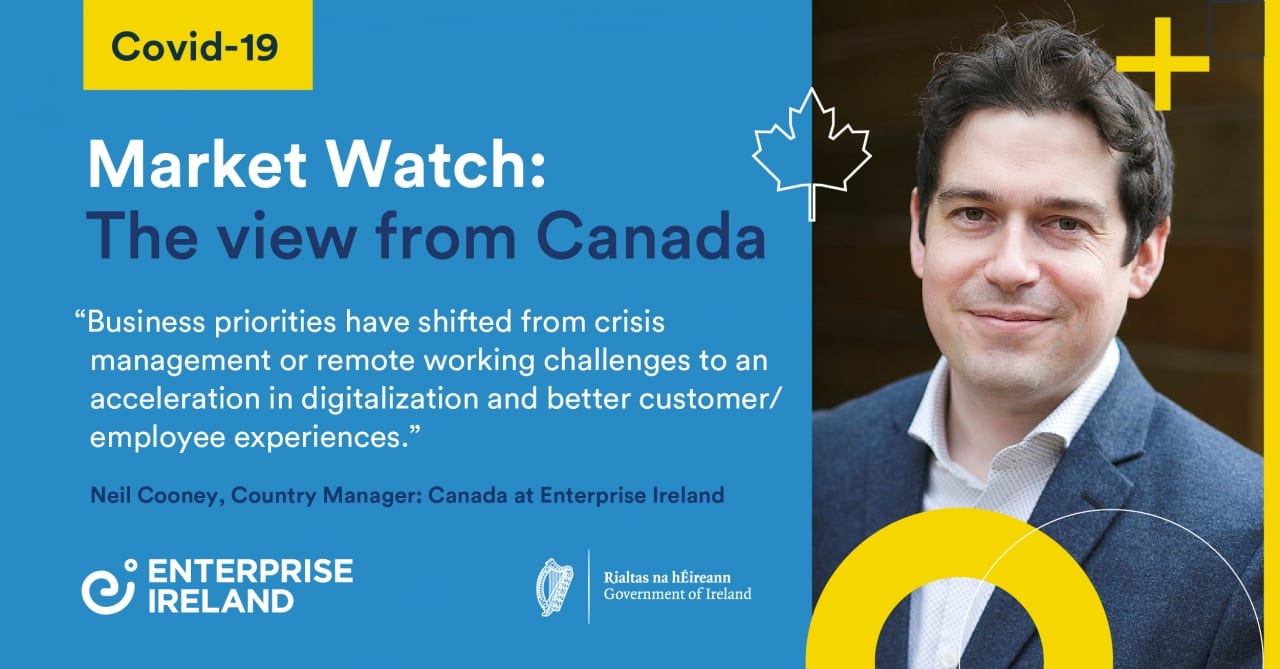 • The public health response to Covid-19 in Canada was well informed by previously having dealt with the challenges caused by an outbreak of SARS in the early 2000s.
• There were some challenges, and the Canadian government has been swift and efficient in offering support to businesses and citizens across the country.
• Canada, like many jurisdictions, is seeing a resurgence of cases and borders are currently closed to mainstream traffic.
• Remote working has seen many industries pivot to a new way of doing business.
• Many sectors are moving apace and there is opportunity for Irish companies.

Along with almost every country in the world, Canada has felt the effects of the pandemic, but Neil Cooney, Enterprise Ireland Country Manager Canada, says while a second wave is also taking its toll, there are some positive signs of growth.

“The challenges of Covid-19 are significant and as a result, the Canadian government has committed extraordinary support to citizens and businesses during 2020 as economic activity is considered to be approximately 5% below February levels,” he says. “However the economy has seen four straight months of growth, as restrictions have been modified to support more of the economy coming back online.”

“Of course, like many other jurisdictions, Canada is seeing a resurgence of cases, particularly in its main metropolitan areas – and borders are currently closed for most travellers. So those doing business need to look carefully at the limited set of exceptions which may apply (for critical infrastructure or in healthcare) – while most workers in government, banking, technology and professional services sectors continue to work from home.”

Aside from the challenges of not being able to visit the market, meet customers and attend trade events, Cooney says another effect of Covid-19 has been that some pending projects were paused as companies reacted to the uncertainty, but this is beginning to change.

“We have seen projects reignite in recent months as business priorities have shifted from crisis management or remote working challenges to an acceleration in digitalization and providing better experiences for customers and employees,” he says.

“Pivoting to virtual has been an area of opportunity for many of the leading trade events and while they vary in format and cost, these events have reduced the barriers for Irish companies interested in learning more about trends and opportunities in Canada – which has always been challenging to do on a coast to coast basis as it is the world’s second largest country.”

The move to remote working and distributed teams has pushed businesses to openly consider solutions from providers, which they will engage with online from start to finish.
And according to Cooney, the manufacturing sector and supply chains generally have done well in overcoming the hurdles posed by the current global crisis.

“Like many markets, the challenges of Covid-19 have accelerated change in many areas with companies and industries adopting new technologies,” he says. “This has represented an opportunity for Irish companies which offer innovative solutions in areas such as cybersecurity, remote working enablement and digital health.

He says with the impact of the crisis on the energy sector, there has been an opportunity to focus investment on environmental mitigation of orphan wells, developing renewable energy and charting a cleaner, more efficient energy future.

And the construction sector has continued its buoyant level of activity with an increasing focus on modular housing deployment and environmentally superior building technologies currently in demand.

“In addition, Canada has continued to invest significantly in its public infrastructure, including a recent announcement supporting broadband provision– which at $1.75 billion represents the largest one-time federal investment in broadband.”

Toronto has the highest cluster of AI start-ups in the world and Montréal boasts the highest density of researchers and students of deep learning in the world. This has highlighted an opportunity for EI Canada to join the conversation with focus on Irish AI capable clients.

But while virtual meetings have made it easier for companies outside Canada to explore new commercial relationships, there are certain factors which need to be considered.

“Companies approaching the market often have to think region by region in sourcing distribution, identifying partners, winning customers and setting-up beachhead sales operations,” says Cooney. “And while doing this in-person has always been a challenge given the scale of the territory, the current reliance on virtual meetings has created more of a ‘level playing field’ for companies outside Canada exploring new commercial relationships.

“But it is officially a bilingual country which means many products and services must offer English and French to participate in procurement or Request for Proposal processes. To this end, Enterprise Ireland has recently opened an office in Montreal to assist Irish companies in doing business in the region.

“And while Canada is often seen as an excellent proving ground and valuable reference site for the wider North America market, it is crucial to display knowledge and responsiveness to the distinct needs of Canadian customers, local regulatory requirements and differences in business practice – something which definitely applies to the complex, multi-stakeholder buying processes we see in the Healthcare and Telco sectors.”

However, the country manager says that Canadians prefer to work with companies which already have an established presence in the market.

“Demonstrating local presence can be an important way to gain trust and to reassure potential customers of the availability of your on-going support,” he says. “Canada is a welcoming country when it comes to entrepreneurs, investors, and talent, including from Ireland, and is as a result attracting significant business to tech hubs such as Toronto, Montreal, Vancouver and Calgary. And during Covid-19, this may mean establishing a virtual presence and hiring locally in-market – which is readily possible given the ease of set-up in Canada.”

To learn more about the steps companies can take to address the impact of Covid-19 visit our business supports page.

Conor O’Donovan: Brexit disruption can be offset by Look for Local campaign

Market Watch – A view from Manchester