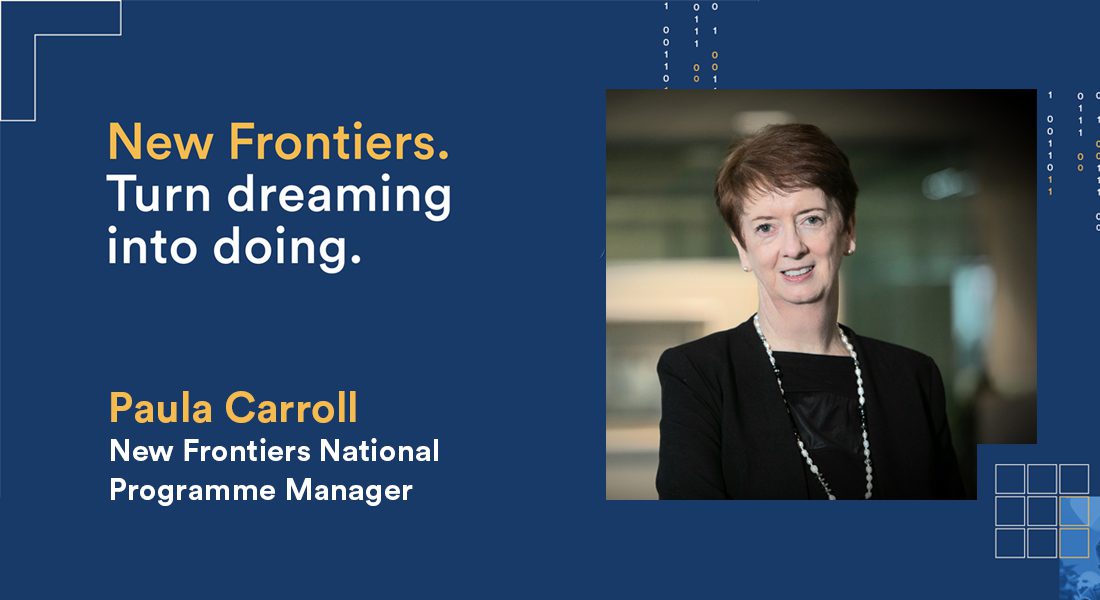 Ireland has a fine reputation around the world for being a country of innovators – indeed, it’s hard to find someone who doesn’t have an idea for a new product or service, or a vision to make an existing solution even better. But translating that idea into a viable business is a massive jump – which is where the New Frontiers programme comes in.

“It’s a programme designed to support early-stage entrepreneurs, from when they have that business idea in their head right through to when they bring that product to market. It offers a structured and supportive environment and runs across three stages.”

Delivered in three phases, the New Frontiers programme is designed to be as user-friendly as possible, allowing you to explore and develop your idea over a number of phases

“In Phase 1, someone may come in with a sketchy idea and want to explore and validate it,” explains Paula. “Within six to eight weeks, they work on the idea and find out if it can become a valid business that’s worth progressing. It’s part-time so requires no commitment; the participant can complete the phase in the evenings or at the weekend without it affecting their job. It consists mostly of interactive workshops.

“After Phase 1, participants can apply for Phase 2, which is an intensive six-month immersive programme.

They also get a lot of support within the colleges or universities in which the programme is being run, and have the opportunity to immerse themselves in the entrepreneurial ecosystem. During this phase they get milestone reviews, to ensure they stay on track as six months can pass very quickly indeed.

“At the end of the six months, sometimes participants can look for additional support either from the Local Enterprise Office or from the High Potential Start Up team in Enterprise Ireland. They could also stay on for Phase 3, which is another three months of support.”

Enterprise Ireland has been managing the programme since 2012, and since then, approximately 4,900 individuals have participated in New Frontiers, with 1,500 going on to the immersive Phase 2 of the programme.

“We also did an evaluation at the end of 2019,” says Paula, “and out of the people we surveyed who had completed the programme, over 83% were still in business. Plus the turnover of those people surveyed was over €300 million.”

Some of those still in business are genuine Irish success stories. For instance, a 2019 participant is Uccello Designs, a design and manufacturing company providing stylish assisted-living devices such as an innovative no-pour kettle; Uccello Designs now employs 11 people in Ireland, Australia and the UK. Another success story is 2017 participant Kianda Technologies, which has developed a no-code business process automation platform that allows business users address core business process management needs without the need for outside help. Now supported by Enterprise Ireland’s High Potential Start-Up unit, Kianda recently experienced a 40% increase in their customer base and is aiming to triple the size of their team by the end of the year. And, Immersive VR Education in Waterford, one of the 2016 participants, raised €6.75 million following a successful IPO in 2018.

Supporting every corner of the country

The regional aspect of the programme plays an important role in Enterprise Ireland’s commitment to developing sustainable businesses all over Ireland. “It’s offered in 18 institutions throughout Ireland,” says Paula. “With Covid, obviously, it all went online but post-Covid, Phase 1 will remain online – which makes it accessible to everyone, regardless of where you live – but Phase 2 will have face-to-face meetings, interaction and networking, as well as some online.

“Having that interaction is so important when building a business as other people can challenge an idea within a safe environment, and give participants the opportunity to practise their pitch in front of mentors and peers.

“New Frontiers encourages people to pitch from day one; we get them to deliver an elevated pitch at the very start, and by the end of even Stage 1, that pitch has been refined and developed through practice.”

The New Frontiers programme is open to early-stage entrepreneurs based in Ireland over the age of 18 with an idea that has employment and export potential. Start dates vary according to your chosen location, but the application process is quick and easy. Simply fill in the online form available on www.newfrontiers.ie and a programme manager will get in touch to discuss your project and send you an application form

Visit www.newfrontiers.ie for details on how to apply.