How Dublin’s Novaerus helps the world to breathe easier 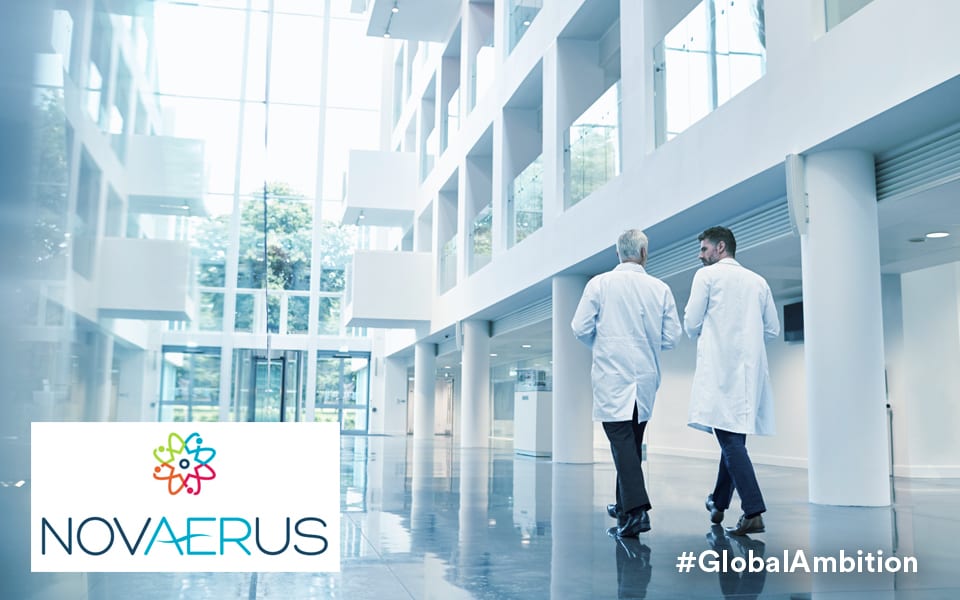 The soaring heat of 2018 highlighted the value of clean water. In Ireland, it was scarcely a matter of days before blue skies and barbecues were replaced by water shortage warnings and hosepipe bans.

Even in a country in which it rains much of the time, there was little grumbling about these restrictions. We understand the complex effort and investment required to ‘create’ water that is fit for human consumption.

Water grabs headlines. But there is another natural resource, just as important to human health, that until recently has been taken largely for granted – the air that we breathe.

Why the quality of indoor air matters

“It’s only recently that we’ve become aware that the quality of our indoor air is not as good as we thought, and is contributing to poor health and infection,” says Kieran McBrien of Dublin-based Novaerus.

“This problem is compounded by the fact that we humans spend most of our time indoors, where air gets trapped and endlessly recycled,” he says. “Each human being is shedding thousands of skin cells every hour, throwing off billions of micro-organisms every minute, and we’re breathing it – all of it.”

For humans who spend most of their time indoors – especially vulnerable populations like children, the elderly, and the sick – particulate matter and contaminants in indoor air can exacerbate asthma, allergies, and chronic diseases, and directly lead to viral and bacterial infections.

This is the problem Novaerus was founded to address. Operating mainly in the healthcare sector, the company has patented a plasma technology that reduces the airborne pollutants which lead to health problems like infection, allergies, asthma and irritation.

Novaerus manufactures a range of portable devices that can be found in hospitals – operating theatres, ICUs, emergency rooms, patient wards, construction areas – as well as elderly and child care facilities, schools, and emergency response vehicles, anywhere in fact that the quality of air can detract from human health, productivity and wellbeing.

Standing up for air quality

Kieran McBrien, Senior Vice President for International Business Development, has been with Novaerus since its foundation and says that in the early days, the main obstacle the company faced was an unwillingness to accept that anything was wrong with the air quality.

“In hospitals, for example, most hygiene standards still don’t apply to air quality so it’s an easy one to ignore,” he says. “That’s despite a mountain of scientific evidence showing that pathogens can travel for long distances on the air currents that swirl around hospitals and other buildings. As long as the air is moving, so is the bacteria.” These bacteria and viruses can transmit infection via the air or they can fall on to instruments or surfaces to contaminate hands.

“Some markets are more accepting that air quality is an issue,” McBrien says. “We started in the US where we targeted the elderly care sector, and today we have a significant number of installations that are helping to reduce the instance of respiratory illnesses and other airborne issues. We’re also branching out through hygiene programs in schools.”

The firm has also gained traction in Africa, Eastern Europe and particularly Asia – in South Korea, for example, a staggering 80% of all ambulance rescue vehicles now carry Novaerus technology. (Novaerus is also one of only two companies to pass stringent air sterilisation standards set by the South Korean government to enter operating theatres.)

Having started small, Novaerus is now operating in the big time. Sales of the portable devices are expected to grow by 40-50% this year and the company is targeting markets including China, Germany, Japan and India next year and beyond.

Distribution is handled by a global network of partners, mostly in the healthcare sector, who pitch and sell the proprietary technology into hospitals, clinics, ICUs, operating theatres, anywhere there are people whose immune system is compromised – including the staff whose daily attendance is integral to the business operation.

Innovation is the driving force behind this success – “our whole operation revolves around R&D,” says McBrien – and the company has an enviable facility including fully-equipped labs at its HQ in the DCU Innovation Centre, Dublin. (The company also has a US base.)

A decade or so on, however, Novaerus has not forgotten the role played by Enterprise Ireland in its growth. “Enterprise Ireland got involved with us at an early stage and helped us to find distributors in the US, Asia, Europe and the Middle East, most of whom are still with us, says McBrien.

“The effort that Enterprise Ireland puts in to help Irish companies is just fantastic,” he says. “Setting up trade missions, getting small companies onto the big stage, opening doors, where else would you get it?”

McBrien, a native of Belfast with a background in business and languages, is also adamant that being Irish on the global stage is an advantage. “For us, there’s the whole tech side of things where [Ireland] has a very good reputation,” he says. “The Irish are seen as friendly people, very receptive and good to do business with.”