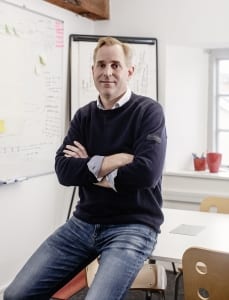 “We found it simpler than the R&D to apply, and the approval came faster as well.”

Securing a contract to develop innovative booking engine integrated with the property management software for Ireland’s largest hotel group was just the opportunity p3 Hotels CEO Phelim Pekaar had been looking for.

After years of successfully supplying hotel groups with custom-designed ecommerce software solutions, Phelim wanted to develop a scalable product that p3 Hotels could roll out to multiple customers. However, it would take significant resources to research, develop and test such a product.

Phelim explains: “We came to Dalata [Hotel Group] with a design of how we thought the booking engine should really look. It was a fresh design for the user interface and we also pitched the idea of online check-in. The response was really positive – they loved the online check-in and we won the contract.”

p3 Hotels decided to build the software solution and sell it to Dalata on a license fee basis, as opposed to being paid a project fee, which also meant that p3 Hotels would have to fund the development costs.

Phelim spoke to Enterprise Ireland about research and development support. “We had done an R&D grant and a business improvement grant with Enterprise Ireland before and this time I was advised to do the Agile Innovation Grant,” he says. “We found it simpler than the R&D to apply, and the approval came faster as well.

“We were able to do the project properly; we didn’t have to cut corners. We had six people involved in the project, we did user testing, we designed the screens, we talked to four hotels about how they did the check-in process.

“Our ecommerce solutions for hotel groups have to communicate with a central reservation system called Opera, which is owned by Oracle. We got the engineer from Opera over to our office for two days and we went through all the APIs of how this works.

“The product went live in two Dalata properties last July and has since been rolled out to another 24 hotels.”

The Agile Innovation Fund offers up to 50% funding to a maximum of €150,000 in grant aid for projects with a total cost of up to €300,000. It is designed to make it easier and quicker for smaller companies to access research, development and innovation funding. Agile’s main feature is its fast turnaround time, with an application process that results in decisions in a few weeks rather than several months.

The innovative approach p3 Hotels took carried an element of uncertainty. However, it wasn’t the first time that the company had shown the courage to do things differently. Since 2009, p3 Hotels hadn’t gone after any new business that was not a hotel but had maintained existing contracts with customers in other sectors. By 2016, these contracts still accounted for almost 30% of their revenue but Phelim took the tough decision to end all non-hotel contracts in order to focus exclusively on winning customers in that sector.

He says: “That was really hard – it was a big risk – but it was absolutely the right decision because before the money stopped coming in from our last non-hotel contract, we had already replaced it with a new large hotel group, Britannia Hotels.

“It’s serendipitous, isn’t it? The minute you let something go, your focus is different, and you allow new opportunities to come along. In the next two years we won five new hotel groups, doubling the number that we had.” says Pekaar.

The support of the Agile Innovation Fund has been instrumental in this growth. Phelim says: “Agile helped us turn our whole development process on its head. It provided the resources that meant we could develop a core software product that is scalable – one that can be rolled out to new customers. Previously, our work was all custom-built for individual customers.”

“We now have a very aggressive growth plan to target hotel groups in the UK, Europe, and the US. Oracle is now recommending us because of the value we bring to their Opera system. I would say that we were instrumental in Dalata rolling out Opera throughout all their hotels. We’ve also been instrumental in a number of other hotels staying with Opera when they go to a retainer process. Our hotel clients know that if they move away from Opera, they lose us – and we add so much value to the rest of their business.”