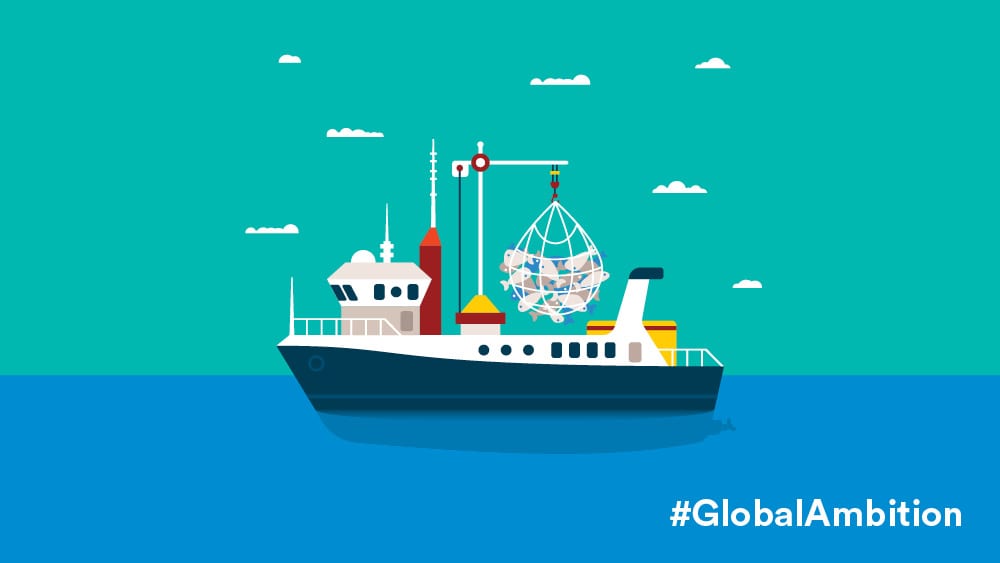 Based in Killybegs in County Donegal, SeaQuest Systems was founded by Bert Leslie, current managing director in 1986, serving local and national fishing fleet. Brian Leslie joined the company twenty years ago, after graduating from Dublin Institute of Technology with a degree in mechanical engineering.

Since then, the company has become a leader in the design and manufacture of pumps and hydraulic systems for fishing and offshore vessels. Its products are prized for the excellence of their design, sturdy construction and superior performance.

The company’s strong reputation in the fishing sector led to an unexpected call from a company in an entirely new industry for SeaQuest Systems – aquaculture.

“One day we got a call out of the blue from an aquaculture company in Norway, to ask if we could design and build a pump to move salmon,” explains Brian.

The Norwegian company was searching for a solution to a recurring problem with farmed salmon – sea lice. With lice a naturally occurring parasite in wild salmon, nature’s remedy is simple – when salmon swim back upstream to their spawning grounds, the freshwater kills salt-loving lice.

“Freshwater kills off sea lice but, in this instance, it’s not a sustainable solution,” says Leslie.  “Similarly, the traditional way to manage the problem, through the use of antibiotics, is not a long-term solution because anything treated that way becomes resistant to it. Of course, consumers don’t want to think about antibiotics ending up in their food either, so there has been a move away from that approach for a number of years.”

With transferring salmon into slightly warmer seawater being shown to work, the Norwegian company wanted to know if SeaQuest could engineer a pump to do just that. “I told them I didn’t see why it wouldn’t work,” says Leslie.

“My feeling was that we’d give it a good go. Either way, it would be the cheapest R&D we’d ever do. If it worked we’d have a new customer and it was a good way to check out a whole new market.”

Aquaculture, or farmed fish, is a growth industry. “Ultimately it is going to be bigger than fishing as a sustainable way of feeding people,” says Leslie.

But only if it solves the problem of sea lice.

SeaQuest set to work designing, manufacturing and testing a pump that could safely transport the salmon from cold to warmer water and back. Getting the solution right was painstaking.

“Our earliest attempts didn’t work but it was only when we installed windows into the test pump that we could see why. What was happening was that the smaller fish would go with the flow but the bigger ones would swim against the current. It comes naturally to a salmon to do that but they were getting bruised and stressed, and in some cases dying. In the end, we could see that rather than adapt one of our own pumps, we needed to design an entirely new solution, something that would be completely stress-free for the salmon.”

SeaQuest was already renowned as one of the best makers in the world of pumps for pelagic fishing. “That’s why the Norwegian company came to us with its problem. Their problem piqued our interest, ultimately opening the door to an entirely new sector for us.

“Once we got a feel for the potential opportunity – given the size of the aquaculture market – we reckoned we needed to invest around €360,000 to take advantage of it.”

The company made a successful application to Enterprise Ireland for R&D project funding. “One of the things we stressed in our application was the time-sensitive nature of the R&D project. We needed it to be ready in time for Aqua Nor in August 2017. That is the world’s biggest aqua culture trade fair and takes place biennially, but we also needed the pump to be fully tested before the show.”

Not alone did they achieve both goals but such was the pump’s success in use that it sparked enormous interest at Aqua Nor. So satisfied was the Norwegian customer that it acquired worldwide distribution rights for the pump from SeaQuest.

“It’s an arrangement that suits us perfectly, as it will bring our brand around the world, without requiring a major sales input for us.”

The success of the R&D project has helped grow the business, which employs 60 people. “We are now expanding our facilities again, just three years after having already extended. It’s happening sooner than we had expected to due to demand driven by that R&D project, we will be investing approximately €3.5 million in this new expansion and will expand our workforce.

“Focusing on Norway was hugely helpful because Norway is the biggest aquaculture country in the world. What it does in aquaculture, the rest of the world follows.”

The importance of innovation

The Enterprise Ireland RD&I grant application process was straightforward. SeaQuest is also applying for a patent for the pump, and hopes to avail of the lower tax rate applicable under the Revenue’s Knowledge Development Box initiative. Much of the content used in its Enterprise Ireland application will be suitable for Revenue, streamlining the process, Leslie comments.

The timing of the new intellectual property couldn’t be better either, as a patent currently of value to SeaQuest heads towards its end of life.

“Innovation is key for us because we don’t want to compete on price,” he says.

But while Brian has been an innovator ever since he designed and built his first fish pump while still at college, until now he never viewed SeaQuest’s innovations as research and development.

“We never thought of that work as R&D. We are all about innovating, in so far as clients have a need, we build a solution. We’re always trying to make our clients’ job easier, that’s just what we do. To me, R&D was always something I associated with paperwork.”

The impact of the innovation support SeaQuest received from Enterprise Ireland rectified this misperception. RD&I is now something that Leslie expects SeaQuest to do a lot more of.

“Because Ireland is never going to be the cheapest place to do something, we have to do it better, we have to innovate.”

For more information on how Enterprise Ireland supports R&D visit our innovation supports.