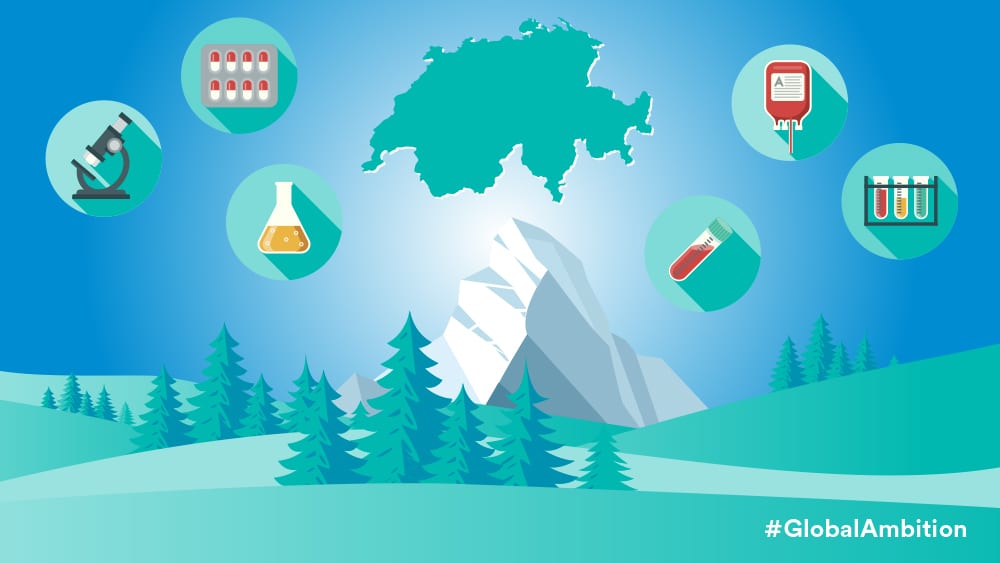 Vincenz Wagner, senior market adviser for Switzerland at Enterprise Ireland, explains why it is time for smart Irish companies to consider this early adopter market.

Switzerland is known as one of the most competitive economies in the world, with one of the highest rates of GDP per capita, an attractive tax regime, and a stable legal and political system. What is less well known is that Switzerland imported more from Ireland than from the United Kingdom in 2016, at a value of €6.4 billion.

Switzerland is also already Ireland’s 5th bilateral trading partner. With a population barely double that of our own, Switzerland is the 11th largest market globally for sales from Enterprise Ireland-backed companies, ahead of larger markets including Canada and Australia. Exports to Switzerland from such companies in 2016 alone were valued at €300 million.

In the context of Brexit, now is a good time for Irish exporters to consider the market. Switzerland uses the English language widely for business, overcoming one challenge Irish exporters to Europe often face. Payment defaults and returns rates are significantly lower than elsewhere. Switzerland’s VAT rate of 8% is much lower than other European countries, for example Germany at 19% and France at 20%. The generally stable exchange rate between the euro and Swiss franc also creates favourable conditions for Irish exporters.

Switzerland shares a number of parallels with the Irish market, the most significant being innovation. Switzerland is the world’s most innovative country according to the Global Innovation Index, with almost 3% of GDP invested in research and development.

Many Irish companies find customers in Switzerland more prepared to adopt innovative new solutions than those in nearby markets. With its early adopter reputation recognised across Europe, winning business with a well-regarded Swiss customer carries a lot of weight.

Switzerland is home to unique leading industry clusters, for example the life sciences cluster in the Northwest region of Basel. In addition to chemical and pharmaceutical firms like Novartis, Roche, and Syngenta, it encompasses a dense network of medtech, biotech, and nanotech companies, well-suited to the capabilities of innovative Irish companies in the sector.

Mark Ennis, Business Development Manager at Perigord, a leading provider of communication solutions to the pharmaceutical and healthcare industries, comments, “Swiss business people are interested in Ireland and are very professional. Customers in Switzerland expect the highest quality and service levels and Irish companies like Perigord can exceed their standards. Swiss customers are willing to pay for a pharmaceutical service that meets regulatory requirements and a vendor that fulfils their needs”.

Acquiring an ever-greater relevance is the Swiss ICT sector, with companies such as IBM and Google setting up offices in Switzerland, a good match for the capabilities of Irish technology companies. As a high-tech export nation, the market is in need of sophisticated high-end component suppliers.

Pam Chahal-Harris, Vice-President of Global Marketing at Nualight, a leader in LED case lighting technology, says, “One of the main reasons Nualight entered the Swiss market was due to its adoption of energy-efficient and sustainable technologies ahead of the rest of Europe. Switzerland has always had a very progressive retail culture, one that is happy to invest and test new ideas. Almost anything we launch which is new or likely to disrupt the market, we find Switzerland is one of first markets to adopt it.”

There remain challenges to doing business in Switzerland that Irish exporters should be aware of. Switzerland is not a member of the EU but its relations are governed by a series of bilateral agreements. EU standards are largely, but not always adopted. The Swiss government does not impede trade and investment; it considers liberalisation of existing laws to ensure Switzerland remains an attractive business location.

As Enterprise Ireland recognises the potential of the Swiss market, it has allocated resources and appointed a dedicated market adviser who will assist Irish companies in identifying opportunities and offer guidance on how to deal with challenges, including pre-visit support, in-market support, mentors, networking events, and financial assistance.