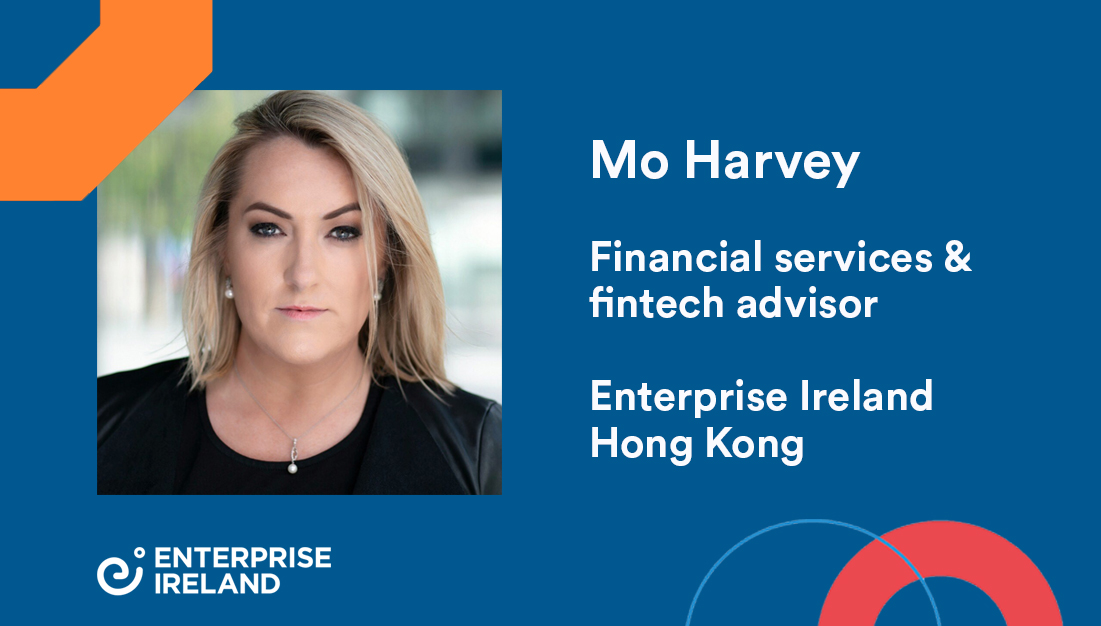 The Irish fintech sector has long been dominated by the payments industry but the regtech (regulatory technology) sector in particular has been quietly achieving great heights globally and without much fanfare, until now.

Mo Harvey, Financial Services & FinTech Advisor, Hong Kong, says the sector is often overlooked as it is not consumer-facing, but in fact regtech has been steadily growing in sophistication and applicability.

“There are varying definitions out there (as to what regtech is) but, at its core, it is the use of new technologies by institutions, banks, insurance companies or any regulated entity to meet regulatory compliance challenges in a more efficient way,” she explains. “It transforms risk management and compliance functions and enables companies to strategise and grow while complying with even the most complex regulations.

“Ireland is an important centre for international financial services with a high-quality talent pool working in legal, risk and compliance functions – currently, regtech is the largest indigenous fintech sub-sector and it is bubbling with promise.” says Harvey.

According to Harvey, regtech is the ‘unsung hero’ of the fintech sector and the Asia-Pacific region is ripe for Irish firms within in the sector.

“Pre-pandemic, the global regtech market was predicted to grow from USD$6.3 billion in 2020 to USD$16.0 billion by 2025, a rate of over 20% per year, with Asia-Pacific accounting for the highest growth rate over this period,” she says.  “However, COVID-19 caused an acceleration in adoption in tandem with a fintech boom so the market could hit as high as USD$30 billion by 2025.

“Market and industry drivers such as the 2008 financial crisis, increasing regulatory enforcement actions and fines, proactive regulators encouraging regtech adoption, digital banks, payments and lending, virtual assets and remote onboarding are just some of the contributing factors which have created opportunity for specialised solutions.

“Regtech adoption is mature in Europe and the USA, but Asia-Pacific presents an interesting opportunity for regtech companies. It is a uniquely fragmented region of developed and developing markets, with a number of sophisticated financial ecosystems and complex regulatory environments.” confirms Harvey.

Enterprise Ireland began its Asia-Pacific wide regtech initiative over three years ago and has just released its ground-breaking report on The State of RegTech in APAC, and Mo Harvey says the report has even garnered support from all the key fintech ecosystem players throwing their weight behind it, from the APAC RegTech Network and The Regtech Association of Australia to the FinTech Associations of Singapore, Hong Kong, Japan, and Malaysia.

“Consequently, people are starting to take note of what Irish regtechs have to offer out here.”

Plenty of opportunity for Irish firms

Covid 19 may have caused many problems for industry in every sector across the globe but the fintech expert says it has brought about some positivity for companies in the regtech sector.

Right now, we have a perfect storm of opportunity,” says Harvey. “Regtech adoption in Australia is well-advanced but it is at a relatively early stage in the Asian banking market with opportunities for further growth.

“While many banks have started using regtech, most commonly in financial crime, regtech is employed in a low percentage of risk management and regulatory compliance activities.

“The breadth of regtech adoption is expected to increase over the next year, especially in the areas of conduct, customer protection, regulatory and tax reporting, and regulatory compliance obligations.” says Harvey.

“In addition, we are seeing regulators in key markets such as Australia, Singapore, Hong Kong, and Japan, all encouraging the adoption of regtech (some regulators going as far as incentivising banks to buy regtech solutions). So now is a good time for regtechs to start building at least one Asia-Pacific market into their expansion strategy.”

In outposts around the world, Enterprise Ireland is working hard on behalf of Irish businesses and its strategy with regard to regtech is to help the sector cluster in Ireland to be synonymous with excellence.

“There are a number of Irish companies already enjoying global success,” says Mo Harvey. “These include Fenergo, Vizor, Daon, MyComplianceOffice and Know Your Customer, while AQMetrics, Cerebreon, Sedicii and DX Compliance are gaining international traction. Hopefully more can follow in their footsteps.

“Marrying Europe’s position as a global leader in regulatory and compliance standards with Enterprise Ireland’s investment in innovative technology-driven companies, has provided fertile soil for Ireland to have a world-class regtech cluster and support the imminent global regtech boom.”

To learn more download our State of Regtech APAC report.