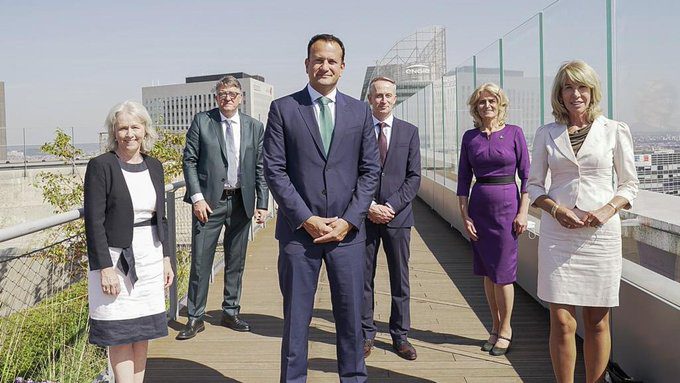 It’s been a long and difficult 18 months for Irish businesses, but now that we can finally travel abroad and meet new and existing companies, the recovery has well and truly begun. In fact, Enterprise Ireland’s ambitious calendar of in-person trade missions has already begun, with the Tánaiste and Minister for Enterprise, Trade and Employment, Leo Varadkar, leading a team on a visit to the UK, France and Germany in early September.

This was the first in-person trade mission since the EU-UK Trade Agreement and the Covid-19 pandemic, and underlined Enterprise Ireland’s commitment to helping Irish companies grow and prosper during this period of recovery. “This trade mission was a reflection of our commitment to the economic recovery, getting Irish businesses out there as quickly as possible to take advantage of opportunities in these three important markets,” says Tom Cusack, Divisional Manager for International Sales and Partnering at Enterprise Ireland.

Together, the UK, France and Germany represented 38% of total Enterprise Ireland client exports in 2020, with over 2,300 Enterprise Ireland client companies exporting to these three markets. “Brexit has happened but the UK continues to be the No.1 export market for Irish companies,” says Tom. “Our ambition is to sustain and grow exports into the UK while growing exports outside the UK too. France and Germany are important to us; each market is worth over €1 billion, and as part of the Eurozone, there are several huge advantages in trading with both countries, including the currency, ease of access and ease of trading. But the UK remains extremely important.”

While undoubtedly the past 18 months have been challenging, Irish companies have shown great resilience and tenacity in continuing to trade during tough times. In fact, despite the challenges of Covid-19 and Brexit, Enterprise Ireland client exports remained steady in 2020, achieving exports of €25.48 billion. Plus, over the last 12 months, more than 50 companies have set up a new presence on the ground in the UK, French and German markets, in such growth areas as digital technology, life sciences, construction, fintech, energy and transport.

“Irish companies have been remarkably resilient over the last 18 months, and have continued to win business and maintain existing business without being able to travel,” says Tom Cusack, Divisional Manager for International Sales and Partnering at Enterprise Ireland.

“Some industries have been more impacted than others, but our 2020 numbers would have effectively held their own with 2019, which is very positive.”

To help Irish companies grow and recover, the purpose of the September trade mission was practical, and enabled Irish companies to meet potential new customers and decision makers in many different industries in the three countries. “Ultimately the mission was about raising the profile of Irish businesses and Irish products in the UK, France and Germany, and highlighting the level of innovation and commitment coming out of Ireland,” says Tom. “It was also a chance for companies to pitch to potential customers in each country. The presence of the Tánaiste always helps to get people into the room, so the mission proved a valuable opportunity for Irish companies.”

The first day of the trade mission took place in London, underlining once again how vital the UK market is to Irish companies. Highlights of the visit included an innovation exchange event, attended by the Tánaiste, with UK local authorities and Irish companies. There was also opportunity for focused business meetings with key decision makers from the UK insurance and healthtech industries.

In Paris, much attention was paid to large infrastructure projects, and included meetings with Réseau de Transport d’Electricité and EirGrid, partners in the Celtic Interconnector project. There were also meetings with representatives from Le Grand Paris project, the largest transport and infrastructure project in Europe focused on mobility, sustainability and urban development in the Ile de France region.

Over the course of the trade mission, the Tánaiste also met with a number of IDA Ireland existing and target client companies from the financial, telecommunications, insurance and e-commerce sectors.

“It was a very busy couple of days but we believe the trip really opened doors for Irish companies, highlighted the significant benefits in doing business with Irish companies and ultimately helped their growth and recovery by introducing new customers and encouraging new business,” Tom explains

“This trade mission was hopefully the first of many. We have a draft schedule of missions running to the end of the year that includes the US and the Middle East, underlining our commitment to get Irish companies back out there. Where possible, the export agenda will be fully supported by Ministers from the Department of Enterprise, Trade and Employment, which always helps to open doors during these missions. We’re an island nation and exports are vital to us; we have a strong reputation throughout the world and our priority is to sustain and grow this through these trade missions.”